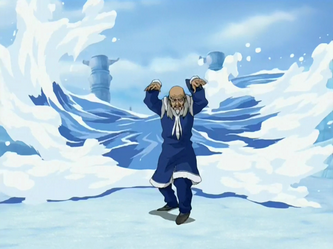 Pakku, the North's master waterbender, duels against Katara.
"You want to learn to fight so bad? Study closely."
—Pakku
Advertisement:

After the journey to the Northern Air Temple, the group lurks around the waters surrounding the North Pole, seeking out the Northern Water Tribe. They are found by a group of waterbenders from the tribe, who show them the way. Upon arriving, the gang is welcomed warmly by the citizens of the Northern Water Tribe, and the chief of the tribe throws a huge party in celebration. Sokka meets Yue, an attractive princess whom he falls for. Aang and Katara seek to learn waterbending from a master named Pakku, but he refuses to teach Katara due to sexist customs. Katara proves herself worthy, both by demonstration of technique and by invoking the memory of Pakku's beloved ex-fiancée—Katara's own grandmother, who could not stand to live under the Northern Water Tribe's misogyny—and Pakku relents. Meanwhile, Admiral Zhao realizes that Zuko is the Blue Spirit and hires the pirates from "The Waterbending Scroll" to assassinate the prince; hearing that his nephew was killed, Iroh agrees to assist Zhao with an attack on the North Pole. But Zuko has survived, and, with Iroh's help, sneaks aboard Zhao's lead ship as his fleet departs.