Recap / Avatar: The Last Airbender "The Siege of the North, Part 1" 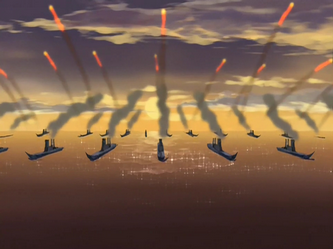 "It's the Fire Nation. They've closed in on the North Pole."
Advertisement:

In the Northern Water Tribe, things are going well for our heroes. Katara and Aang are still taking waterbending lessons from Master Pakku. Katara in particular has advanced quickly — faster than any student that Pakku has taught before — while Aang's tendency to goof off has made him fall behind. Meanwhile, Sokka's friendship with Yue grows, even though they both know that they can't have more.

But all that grinds to a halt when black snow starts raining down on the Northern Tribe— a result of the soot from hundreds of Fire Nation ships advancing to conquer and destroy the last bastion of the Water Tribes.

With no other choice, the Water Tribe goes to war; Aang, remembering how he wasn't there when the Fire Nation wiped out his own people, vows that he will make a difference this time. Yue tells Sokka that she can't see him anymore, as her feelings for him make things too confusing. Sokka deals with this by volunteering for a guerrilla mission, facing both death and, to his surprise, Yue's jerk fiance Hahn.

The first day of the invasion sees the Fire Nation Navy bombard the Northern Tribe with fireballs from a distance, while Aang and a few Waterbenders take on the ships head on. It goes badly for the defenders— there's just too many ships for them to handle. Meanwhile, Sokka is pulled off the top-secret mission after getting into a fight with Hahn, although the Water Chief later admits that he had an ulterior motive; he wants Sokka to guard his daughter.

As night falls, Iroh, acting as advisor to Zhao, recommends withdrawal, as the moon is nearly full, which empowers waterbending. Zhao agrees, while stating that he's working on a solution to "the moon problem."

During the cover of night, Zuko, who has been hiding among Zhao's crew in disguise all this time, sneaks into the Water Tribe in an attempt to kidnap Aang. Meanwhile, Aang, his battle against the fleet fruitless, gets an idea; the Water Tribe worships the Moon and Ocean spirits as the first Waterbenders, so how about he gets their help? Yue and Katara think that's a great idea, with one caveat; the last time Aang entered the Spirit World, it was totally by accident, so how's he supposed to do it on purpose? Yue helps by leading Aang and Katara to a secret oasis that's the spiritual center of the Northern Tribe, figuring that it'll make it easier for Aang to cross over. Aang meditates for a while, before crossing over as he watches a pair of black-and-white koi fish in the oasis that definitely won't be important later.

It is here that Zuko finds him, and though Katara puts up one hell of a defense, the rise of the sun gives Zuko enough of a boost to defeat her and kidnap Aang. This has the side effect of stranding Aang in the Spirit World, as his body is not where he left it. Furthermore, the rising of the sun means that the Fire Navy resumes its attack on the Water Tribe. The episode ends with the walls of the city breached and Zuko toting Aang across the frozen tundra.