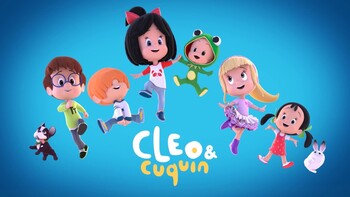 Cleo & Cuquin is a 2018 Spanish-Mexican preschool show produced by Ánima Kitchent in cooperation with Televisa for RTVE (Radiotelevisión Española) The show is based on characters from Familia Telerín created by José Luis Moro Escalona, who also appeared in the animated movie El Mago de los sueños. It debuted TVE's Clan in Spain on January 7, 2018.
Advertisement:

The show focuses on a group of six siblings, two in particular being the oldest sibling Cleo, and her baby brother Cuquin, as she helps them solve the problems they encounter. Following each problem, Cleo uses the knowledge from the episode to determine what she wants to be when she grows up.