Western Animation / Dora and Friends: Into the City! 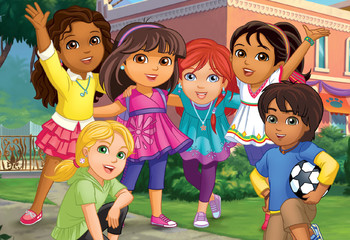 From left to right: Emma, Alana, Dora, Kate, Naiya, and Pablo.
"D-O-R-A
Dora and friends, into the city
Tall buildings and so much more
An adventure behind each door (¡Vámonos!)
Come on, let's explore con todos mis amigos
Make a difference, take a chance (Let's go!)
Come and lend a helping hand
Hold on tight... (¡Canta conmigo!)"
— The show's "Do It Yourself" Theme Tune
Advertisement:

Dora and Friends: Into the City! is a 2014 Spin-Off of the Nick Jr. cartoon Dora the Explorer. A now preteen aged Dora has moved with her parents to a city. Along with her new friends, the Explorer Girls (consisting of Alana, Naiya, Emma, Kate, and Pablo), they do things around the city.

The show originated from a special that premiered on Nick Jr. on August 7, 2011 called Dora's Explorer Girls. It featured Dora and the Explorer Girls having to search for and find the tickets for a Shakira concert after Alana accidentally leaves her jacket in the donation bag she brought.

The show still keeps its theme of teaching Spanish as well as being a part of the community. However, the Spanish curriculum on the show is expanded to include phrases and commands rather than just the single Spanish words on the original show.

A dragon gets a belly ache from eating too many marshmallows.

A dragon gets a belly ache from eating too many marshmallows.