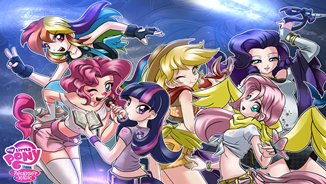 A Fan Webcomic that is based on and shares the same name of My Little Pony: Friendship Is Magic drawn by Chilean artist Mauroz

The series takes place in an Alternate Universe where all the characters are humans. Twilight has just started high school when she receives a package from her archaeologist older sister Celeste. All it contains is a tiara, a odd disc with five symbols and a note telling her to put the tiara on. Twilight does so and meets the spirit of Celestia from Equestria. Celestia explains her memories are fragmented and she doesn't know how she came to be in such a state. She does, however, remember two grim prophecies; an individual will cast the world into darkness, followed by a being who will then spread chaos across the land. The only thing that can stop them are the Elements of Harmony. Twilight must find out who has the power to wield them and convince them to join her crusade - a task made more difficult by a person calling herself Luna, who will do anything to stop the Elements from activating, among other incoming evil forces.

The comic is currently being hosted on DeviantArt with volunteers helping to translate it to English once a new comic is released.

And before anyone wonders, no, it was not inspired by My Little Pony: Equestria Girls. The comic actually predates that movie's conception.

You can start reading it from here.

Friendship is Magic has the following tropes: