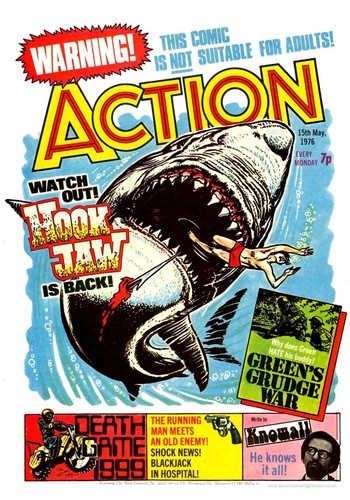 Definitely not suitable for adults.
Advertisement:

Action was a short lived British comicbook serial published in 1976 and 1977 by IPC. Created by Pat Mills, it earned much attention for its focus on fairly Grimdark, gritty, gorily violent stories, many of which were "dead cribs" (ideas derived by ripping off from currently-popular films, books and other comics) intended to appeal to the growing punk culture and the increasingly disenfranchised youth of Britain. Its stories had much the air of a Darker and Edgier take on classic Pulp novels, while detractors likened it to the penny dreadfuls of the Victorian era.

This, ultimately, was the comic's downfall. The dark themes of the comic, combined with the strong anti-authoritarian inclinations of its stories, ultimately resulted in a successful attempt by the National Viewers And Listeners Association, led by Mary Whitehouse, to force IPC to censor the stories. With the violence and cynicism toned down, Action soon lost its fanbase and was merged with Battle Picture Weekly.

Though obscure, Action played an important role in the development of British Comics; it was the first multi-themed "boy's stories" comic (prior to Action, all "boy's stories" comics would focus on one theme - war or sports, for example), and it proved that there was a market for boy's adventure stories outside of the classical moulds. IPC and Pat Mills would go on to create the successful 2000 AD comics. Many of the early 2000 AD stories have a very strong resemblance to the moods and attitudes of Action stories, and the stories Flesh and Shako in particular have a strong resemblance to Hook Jaw.

Hook Jaw was later revived in 2016 by Dynamite Comics.

Not to be confused with Action Comics.

Stories that Action produced include the following: