The Charmed Ones battle a warlock who gets stronger every time he's vanquished. Piper wrestles with her decision to move out of the manor. 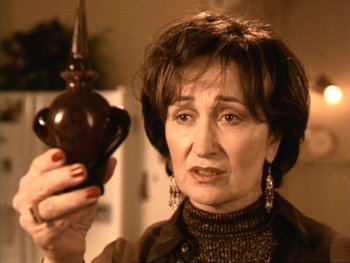 Leo and Piper are trying to be alone, and not having much luck. Piper proposes moving back to the apartment where she and Prue lived before they moved back to the manor to keep an eye on Grams. It's currently being used by friends of hers, but they promised Piper first shot at the lease when they move out. Leo is concerned that the Charmed Ones would not be at their strongest with Piper gone.

Meanwhile, a witch, Ariel, is performing a ritual when her familiar, a cat named Shadow, interrupts her. She tries the spell again and Shadow knocks several potion bottles off of a shelf. As Ariel looks on in shock, Shadow turns into a warlock and kills her.

Piper announces that she and Leo plan to move out. Prue and Phoebe are concerned about the magical implications of such a move, but Piper says that they've handled evil before when only two of them were around.

In a flashback to a time when Grams is still alive, Prue is considering moving out; her boyfriend Roger has proposed marriage. Grams is having chest pains and Piper and Prue try to encourage her to relax, which isn't easy after two policemen bring Phoebe to the door; she was caught shoplifting a pair of shoes.

In the present, Phoebe is shopping for shoes when Shadow attacks. He lifts Phoebe in the air and drops her. Phoebe runs at him and kicks him in the chest. While Shadow is trying to get up, Phoebe throws a spike-heel shoe, which catches Shadow between the eyes, apparently killing him. However, he attacks Piper while she and Leo are getting boxes to prepare for their move. Piper freezes him, then kills him with a box-cutter just as he unfreezes.

In the flashback, Grams has bought a new camera and takes a picture of the sisters, which turns out to be the picture in which the three sisters move closer together in Something Wicca This Way Comes. The sisters get in a squabble, much to Grams' annoyance.

In the present, Phoebe and Piper each mention having killed a warlock, while Prue mentions having killed one in the attic. They realize they are talking about the same warlock, Shadow. All of them think he was too easy to kill. Shadow attacks in the manor and levitates Piper again. Phoebe stabs him in the back with an umbrella, killing him again. The sisters notice that Shadow didn't really try to fight back, and wonder if he can't be vanquished.

The sisters consult the Book of Shadows, but draw a blank. Phoebe sings "I've been working on a vanquish ..." as a hint to Grams, who flips to a page giving instructions for a seance. Prue and Piper are skeptical, but when they close the book, Grams flips it back to the page. They summon Ariel's ghost, who tells them about Shadow. She says that familiars turn into warlocks when they betray their witches. Familiars who become warlocks in this manner must shed themselves of their former lives before the next new moon to become immortal. In Shadow's case, he wants to be killed nine times; if he fails, he will become a cat again for all eternity. She tells them that evil exists solely to spread loss.

In the flashback, Grams talks to Patty's ghost, and is concerned about the sisters' constant arguing. Patty says they'll come together when their destiny is revealed, but Grams doesn't know if they're up to it. She says that she will have to do something if she can't get the sisters to stop bickering.

In the present, Phoebe enters a darkened kitchen to find Shadow lying in wait. He attacks her, and she pushes him over the table. Suddenly, Shadow screams and dies again; it turns out he fell on a knife that Phoebe had unwittingly left on the floor.

In the flashback, Prue talks to Piper about her plans with Roger, and asks Piper to be her maid of honor at the upcoming wedding. They bump into Leo, who orbs away just after.

In the present, it's Piper who wants to move out. The sisters are hanging out at a cafe when Shadow shows up and taunts them. However, the sisters let him know that that they're on to him. Shadow pulls a knife and fatally stabs a woman, forcing the sisters to act; Piper freezes Shadow and Phoebe grabs a knife and stabs him, killing him for the sixth time. The sisters realize that Shadow will just keep killing until they kill him, which is exactly what he wants them to do. Piper tries to cook a potion to vanquish Shadow, or at least to keep busy.

In the flashback, Grams is trying to "keep her hands busy", and offers to help Piper make her favorite chocolate cake. Piper starts adding ingredients, not knowing that Grams is brewing a potion to keep the sisters' powers bound after she dies. Phoebe seems sullen, and is unwilling to join them, saying only she's going "out".

Shadow appears at the manor again. The sisters still aren't willing to kill him, but after he forces them to act by saying he'll continue to kill innocents. Prue flings a knife into him, killing him for the seventh time.

In the past, Grams consults the Book of Shadows as Patty's ghost looks on. Grams is noticeably weaker, and worried that the sisters won't be up to their responsibility as the Charmed Ones once she dies and they receive their powers. She is now convinced that they will never really come together, and decides to use the potion she brewed earlier. After Patty's ghost vanishes, Grams hides the Book of Shadows in a trunk, picks up a potion bottle, and locks the attic door behind her. She never uses the potion, however; she collapses from a massive heart attack and falls down the stairs.

Shadow attacks in the attic and the sisters kill him for the eighth time. Phoebe proposes a way to kill Shadow for good by catching him in the moment of death and magnifying it nine times.

In the past, Grams has just been buried. Piper finds the potion bottle and the sisters wonder what Grams was doing in the attic, which they believed was sealed off. They mention that they only became sisters again when Grams developed heart trouble. Piper wants to cook Grams's favorite meal, but Prue wants to spend the night with Roger, and Phoebe wants to move to New York.

In the present, Phoebe has written a spell to vanquish Shadow, Piper has brewed up a potion and Prue has a poker at the ready. Shadow bursts in through the front door, vowing to kill the sisters once he becomes immortal. Prue throws the poker at him. Just as it hits Shadow, Piper freezes him and throws the potion. The sisters speak the spell, and eight black cat silhouettes appear around him. They enter Shadow, and he warps and explodes. Piper takes the potion bottle that she had found when Grams died. Inside it, she finds the recipe for the potion that Grams was making.

The next day, Leo is loading the car, but Piper has changed her mind and now wants to stay at the manor. She tells Leo that she realizes Grams was willing to take away their powers in order to bring them together. The sisters agree to change rooms so Leo and Piper can have a larger room.