When the sisters fight a demon cursing people with the seven deadly sins, they must first save themselves from succumbing to the powers of their own sins. 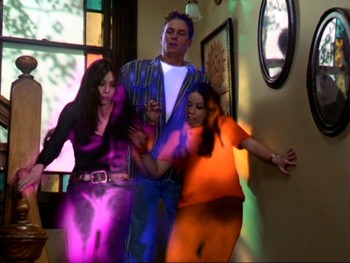 Prue and Phoebe head downtown to check out some possible evil activity Prue found while scrying. Phoebe doesn't like that this caused another delay in a late ethics paper, and is also concerned Prue is going back to putting too much time into her Charmed duties. Prue doesn't think that's the case, and even adds that she doesn't think Piper and Phoebe need her to watch over them now that they've both got guys. Prue thinks the activity she found is in a dumpster. She pops it open to reveal a giant box. Phoebe thinks it has a coffee maker inside, but Prue tells her the box is empty. Phoebe mentions that Cole hasn't been around too often, but does manage to peek in on her occasionally. She wonders if all he's interested in is sex, but Prue reminds her that she got magical confirmation that Cole loves her.

A man in a suit wants something that is in a box held by a demon. The demon tells her what he wants, more greed, is no longer in the box. He throws a fireball at the man, but misses just as Prue and Phoebe arrive. Prue flings the demon aside. The man and the demon go for the box, but Prue swats it into the street. The demon says the box belongs to another demon, Lukas, and fades out. The man runs into the street after the box, and is hit by a bus. Darryl identifies him as Robert Pike, a successful stockbroker and philanthropist.

Another cop, Officer Dean, questions Phoebe and tries to hit on her, but Phoebe tells him she's spoken for.

Lukas is angry with the lesser demon; he got Pike's soul, but needs to deliver seven souls for seven sins. He's even angrier that he has to get past the sisters to get the box back, and vanquishes his henchman.

Prue slips the box into her purse and takes it back to the manor. Phoebe goes to the kitchen to brief Piper, and finds her making sushi for Leo. She wants to start pampering him, like a normal wife. Phoebe and Piper come into the living room to find Prue eyeballing the box. She wants to open it, but Piper wants to call Leo first. At that moment, Leo orbs in and suggests they check the Book of Shadows. Phoebe offers to help, but Piper tells her her ethics professor called and wants to meet with her at 2:00.

While Phoebe goes to change, Prue, Piper, and Leo check the Book. They find that the box contains glowing balls that represent the Seven Deadly Sins. They're used to corrupt paragons of good with sin magnified a thousand times. Prue suspects Pike was infected by Greed. Apparently these sins are spread by infectors who were human before being consumed by sin, such as Lukas. Piper thinks that vanquishing Lukas will cause the sins to lose their power.

Lukas fades into the manor just as Phoebe comes downstairs. Lukas opens the box and throws a sin ball at Phoebe. Prue, Piper, and Leo hear Phoebe's scream and rush downstairs. Lukas throws sin balls at them as well, then fades out. The sisters and Leo don't feel different at first, making Prue think that only mortal paragons of good can be infected.

Phoebe meets with Professor Kass, her ethics professor. She's on the verge of getting an incomplete; in addition to a late paper, magical emergencies have caused her to miss several classes. Out of nowhere, Phoebe comes on to the professor and then starts to make out with him.

Prue walks into the kitchen to find Piper ordering thousands of dollars worth of stuff over the phone. Prue cuts off the phone, and also discovers Piper drinking a glass of wine in the middle of the day. Prue has done some more digging on the sin balls; they infect people a lot faster than expected, and then drive the victims to self-destruction. Piper doesn't think they have anything to worry about since they apparently weren't infected and then takes a bite of chocolate. Phoebe walks in; her professor threw her out of class and she doesn't even remember trying to come on to him. Prue realizes that Phoebe has been infected with Lust, and Piper with Gluttony. Piper calls for Leo, but Prue says that he's in the living room. The sisters find Leo laying on the couch watching TV; he's been infected with Sloth. Piper, Phoebe and Leo start to give in to their sins, but Prue tries to snap them back to themselves. A delivery man arrives with flowers Piper ordered for herself. Phoebe tries to hit on him, but Prue angrily shoos him out.

On the TV, a news program reports that Pastor Roger Tremble has taken a hostage at Bay City Motor Cars, and is demanding a Jaguar; the sisters suspect he's been infected with Envy. Prue and Phoebe head out, but Piper wants to stay and pamper Leo—and herself as well, as it turns out; she sees some expensive goodies on a home shopping channel and wants to order them.

Prue and Phoebe meet Darryl at the scene. Prue runs into the dealership over Darryl's objections and tries to talk Tremble down. She tries to fling the gun out of Tremble's hand, but to her shock nothing happens. Tremble shoots. Darryl nervously calls for her. A moment later, Prue comes out with the hostage and is mobbed by reporters. Just as Prue is about to out herself as a witch, Darryl drags her away and tries to talk some sense into her. Darryl sees Prue's hand is bleeding and her jacket is scorched; apparently the bullet grazed her, but she didn't even feel it. Prue realizes she's been infected after all. Realizing that Lukas might come after the pastor's soul, Prue asks Darryl to hide the pastor in a psychiatric hospital. Prue and Darryl then notice Phoebe's missing and find her making out in a SWAT van with Officer Dean. Prue and Darryl pull them out of the van. Prue realizes she's been infected with Pride; it explains why she initially didn't think she was infected. She drags Phoebe back home. Darryl chews out Dean before suspending him. Lukas fades in and throws the Anger ball at Dean.

Prue and Phoebe go back to the manor and find it full of stuff. Piper ordered it all, and used magic to bring it there rather than wait six to eight weeks for delivery. Phoebe tries to hit on Leo, and an enraged Piper nearly throws a bust at her before Prue takes it away. Prue asks Leo to check with the Elders, but Leo would rather orb upstairs for a nap.

Lukas runs into Dean, who hasn't been able to find out anything about the pastor. Dean suddenly doubles over in pain from the anger raging in him, and Lukas suggests he focus it on the sisters.

Prue is leafing through the Book, but her sisters aren't helping; Piper is getting a foot massage while Phoebe is having dreams about Dean. Prue angrily vows to vanquish Lukas herself. Piper knocks a lamp into the foot spa and is badly shocked. The doorbell rings— it's Dean. Phoebe is delighted to see him, but nearly falls out of the attic window before Prue pulls her back in. Phoebe runs downstairs, but Dean isn't in a cheery mood. Blaming Phoebe for his suspension, he grabs her, shoves her to the ground and pulls his gun on her before demanding to know where they hid the pastor.

He smashes much of Piper's stuff, and she comes down and freezes him; but her power only works for a moment. He shoots and misses. Dean demands to know where the pastor is. Piper feigns ignorance, and Dean shoots again. However, just as he pulls the trigger, Phoebe knocks him down, sending the bullet into the air. Piper falls down, knocking a huge box on top of her. She notices Phoebe unconscious on the floor and tries to get up, but collapses. Dean nearly turns the gun on himself, but Prue flings objects at him and knocks him out. Lukas shimmers in, grabs Prue, and shimmers away.

Piper, one side paralyzed, hobbles upstairs to get Leo. She finds him passed out on the bed. Piper collapses, knocking some stuff off the dresser. Leo comes to and rushes toward Piper. Suddenly, the Sloth ball flies out of him. He starts to heal Piper, but Piper says that Phoebe needs healing more. At that moment, the Gluttony ball flies out of Piper. Piper and Leo realize that the sin balls can be removed with a selfless act. Piper thinks that this means Phoebe is back to herself again; she risked her life to save Piper. Piper and Leo find Phoebe barely alive, but Leo is able to heal her.

Lukas has tied Prue up. She can't break free because Pride has corrupted her powers. Lukas offers to remove the sin ball if Prue tells him where the pastor is. Prue brusquely refuses, prompting Lukas to open up a pit— it represents everlasting torment. Prue demands to be untied before she will tell Lukas where the pastor is, and when Lukas unties her, she jumps into the pit. Just in time, Leo, Phoebe and Piper find her, and Leo orbs into the pit to bring Prue back. Piper freezes Lukas just as Leo pulls Prue out. Prue doesn't even realize she almost died. Piper thinks the only way to snap Prue back to herself is to vanquish Lukas. Phoebe throws Lukas' own sin balls at him. He falls into the pit. The Pride ball leaves Prue, and the Envy and Anger balls return to the box as well. Piper finds the crystal bearing Robert Pike's soul. Leo orbs "up there" to release him.