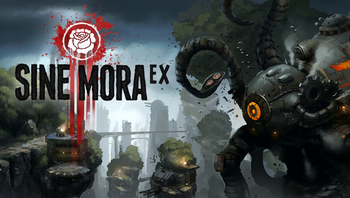 Holding in his hands a giant sieve
Time stands ever sifting
He sifts through worlds, he picks them out
Not with regret, but with delight
He grieves only those that fall
And those that fall deserve to fall
Time spares no pity for offal
Waning nations, cold worlds',
Broken lives' miasmal desire
It's death they deserve - and nothing less.
Advertisement:

Sine Mora is a side-scrolling Shoot 'Em Up game developed in a collaborative effort by Grasshopper Manufacture, and Digital Reality, written and directed by Theodore Reiker. It was published by Microsoft Studios on March 21st, 2012.

This 2D shooting side-scroller has a twist involving time control. There are no lives, and you don't immediately die when you're hit. Instead, players have a time meter constantly counting down. Destroying enemies adds time, while getting damaged removes time. This gives beginners more chances to make mistakes, but in advanced play, players need to constantly destroy enemies while not getting hurt to avoid the time running out. The airplanes in this game have different types of Time Capsules that have different time control effects, such as slowing the game down to avoid damage, or rewinding time, even after death.

Another thing that makes the game unique to the genre is the amount of depth that went into the game's chilling, tragic story and setting. The story is set in a Diesel Punk alien planet called Seol, with two major warring factions: The Empire and a time-controlling civilization known as The Enkies, with the story starting with the Enkie's obliteration. The story directly revolves around the actions of two different groups of Anti Heroes devastated by the recent events. Leading one group is Ronotra Koss, who seeks revenge against The Empire for the death of his son, Argus Pytel, dragging Myryan into the conflict via blackmail. The other major group is the last of The Resistance, consisting of Durak, Akyta Dryad, and Lynthe Ytoo. The language spoken in the game is Hungarian, telling a tragic story of revenge and genocide.

After players finish the Story, more hardcore players can try their hand at Arcade Mode, which only has two modes, Hard and Insane.

The game was rereleased as Sine Mora EX for PlayStation 4, Xbox One, Windows, and Nintendo Switch via THQ Nordic. Additions include improved rendering, co-op for up to 2 players in story mode, a 16:9 aspect ratio (while retaining the choice of changing it to 16:10), 3 new versus modes (Race, Tanks, and Dodgeball), new challenge levels, and an English dub (while keeping the original's Hungarian dub as an option). The PC and PS4 versions of the game also feature a native 4K at 60 FPS when played on a compatible PC engine and PS4 Pro, respectively.