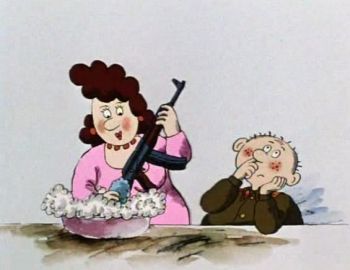 Soviet animated short by Eduard Nazarov, released c. 1985. Adapted after the epynomous verse by Eduard Uspensky. In some strange way it works both as a propaganda piece about the Red Army that straightens up any young fellow and makes a man out of him and at the same time shows how The Army is just as prone to Soviet bureaucracy and ineffectuality as many other departments of state.