Animation / The Adventures Of Vasia Kurolesov 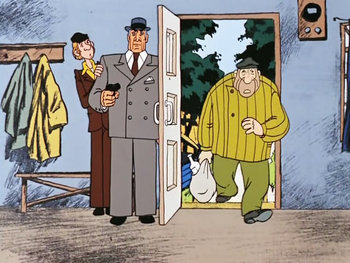 Приключения Васи Куролесова (Prikyuchenia Vasi Kurolesova) is a 1981 Soviet animated short, produced and animated by Soyuzmultfilm. It's based on a 1977 humorous book by Yuri Koval.

It's about a young country bumpkin named Vasia, who lives with his mother on a farm somewhere in rural Russia. One day, she tasks him with buying a piglet in a nearby Bazaar. However, the first pig seller he finds turns out to be a small-time crook called Kurochkin, who cons him by selling him almost literally a pup in a poke. But Vasia is not about to stand for that embarrassment, and, using the same dog he scammed him with, sets out to track down Kurochkin and bring him to justice. As luck would have it, Vasia stumbles across something eternally more dangerous than the mere scamming of pig farmers...

The half-hour crime comedy is notable for its vast uses of snarky Russian Humour and its seamless traversal of the (generally atypical for Soviet animation) Animation Age Ghetto, utilising Scooby-Doo levels of Slapstick to entertain children, and witty writing, a mature premise and reasonably Dark Humour to delight adults. It's still a favourite classic young and old are very fond of in most post-Soviet countries.

You can see it here

in its entirety, untranslated.

The short and the book its based on feature examples of: