"A magical adventure inspired by the Chronicles of Narnia, Walt Disney animated musicals and the parables by Jesus Christ"
— The tagline. 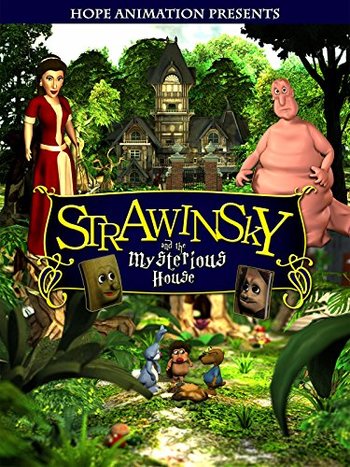 Strawinsky and the Mysterious House is a half-hour animated CGI movie made in 2013 made by Hope Animation. It is specifically based on a German audiobook.

The titular Strawinsky the mole is one of four animal friends living in an unspecified fantasy realm. One day they come across a mysterious house, inhabited by strange residents such as a Scottish troll, a cello, and an elf who turned into a fat abomination by reading books. Ultimately, they have been lead astray from Elohim by the nefarious Rat King, which soon also mind controls Strawinsky's friends by making them read books. It's up to him and the Scarlet Queen to dissolve the books and save everyone.

The movie would likely have faded into obscurity if not for said fat ex-elf's (known as the Globglogabgalab) singing sequence, which has quickly become memetic due to the Uncanny Valley and frankly bizarre lyrics and character design. Oddly enough, however, it's regarded as the least strange thing going on in the movie.

The movie can be purchased here

I'm the Globglogabgalab. I love tropes, and this article is a true treasure trove...