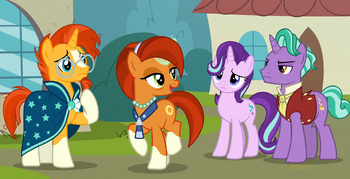 Welcome to Sire's Hollow!
Starlight Glimmer: We'll just have to explain to our parents that we're on an important friendship mission so they can't bother us.
Sunburst: Do you really think that will work?
Starlight Glimmer: Nope!
Written by Dave Rapp
Advertisement:

In the Crystal Empire, Sunburst is surprised that he is being called by Twilight's map, and makes his way to Ponyville. To his further surprise, Starlight has also been called, but she's far less excited about the mission; she points out that the map is taking them to Sire's Hollow, the village they both grew up in. On the train ride, Starlight complains that her father Firelight was always trying to coddle her, while Sunburst is upset that his mother Stellar Flare has continually pestered him about his plan for life.

When they arrive, Sunburst and Starlight find that Sire's Hollow has changed significantly from their last visits: part of the village now houses extremely upper-end shopping establishments, while other stores are set aside for historical purposes. They find their respective parents, learning it is their conflict that has created this duality within Sire's Hollow, and both Starlight and Sunburst initially take this as the problem they are here to solve. After getting over the initial embarrassment of their parents, Starlight and Sunburst set off to try to reconcile their differences, but quickly enough, both Firelight and Stellar Flare agree that they've been battling over how to develop Sire's Hollow and agree to work together. Starlight realizes that this isn't the problem they were meant to solve, since the map has not yet called them back.

Separately, the two work to find what the problem may be, with their respective parents wanting to help given the importance of the mission. But this sets off past behaviors that irks both Starlight and Sunburst. Firelight wants to keep treating Starlight as a young filly and tries to help through lecturing her on his vast knowledge of the history of Sire's Hollow hoping they can discover the friendship problem that way, while Stellar Flare wants to make sure Sunburst has a direction for his life, and thus tries to manufacture a friendship problem for Sunburst to solve so that he can keep on being assigned more such missions. Both Starlight and Sunburst yell at their parents that their help isn't needed. Both soon realize the friendship problem to solve is the broken relationship they each have with their parents.

Both sets of parent-child work out their issues: Starlight convinces Firelight to not treat her like a young kid anymore, and she'll appreciate his help, while Sunburst asks Stellar Flare to not keep pushing on him to find a plan while he works it out for himself. When they come to this reconciliation, they find that their cutie marks are glowing, and their mission is complete. As Starlight and Sunburst prepare to return home, Firelight and Stellar Flare suggest that they can maybe help them on any other cutie map missions, making a road trip out of it. Starlight and Sunburst cannot wait for the train to come fast enough.