Literature / Down a Dark Hall 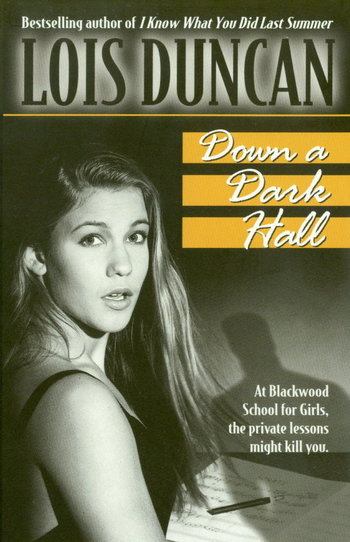 Down a Dark Hall is a young adult novel by Lois Duncan. Originally published in 1974, it has now been updated for 2011 with some extra lines thrown in about why our intrepid heroine doesn't just use her mobile phone or the internet to summon help.
Advertisement:

The story is as follows. Sixteen year old Katherine 'Kit' Gordy is sent to Blackwood Hall boarding school so her mum and stepdad can go on honeymoon in Europe. Although she finds it creepy Kit has to admit the rooms are luxurious, the food is good and the teachers led by the glamorous Madame Duret are intelligent. Unfortunately Madame Duret is using the four girls who make up the student body as vessels to let the spirits of long dead writers, artists, scientists and musicians continue their work. Kit and her friend Sandy are horrified but Ruth who is a genius is excited by the maths and science she finds herself doing while possessed.

Unfortunately being a medium comes at something of a personal price and when Kit and her teacher Jules (Madame Duret's son) find out what this is they vow to escape...