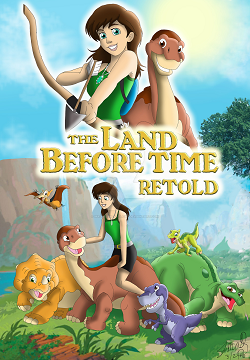 The series adapts the film series, but with a twist: a human girl named Aylene ends up transported to the world that Littlefoot, Cera, Petrie, Ducky, and Spike inhabit, and becomes good friends with them, going on numerous adventures with them.

Thus far, the series has adapted the first film

, and The Time of the Great Giving

, Journey Through the Mists

and The Secret of Saurus Rock

Land Before Time Retold includes examples of the following tropes: