Film / Smiles of a Summer Night 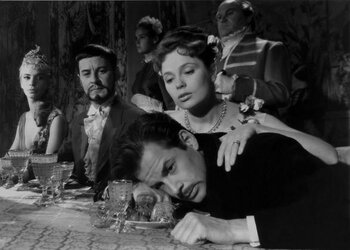 Smiles of a Summer Night (Sommarnattens leende) is a 1955 Swedish film written and directed by Ingmar Bergman. It revolves around a Love Dodecahedron in Sweden around the turn of the century.

Fredrik Egerman (Gunnar Björnstrand) is a lawyer with a much younger wife named Anne (Ulla Jacobsson), an adult son named Henrik (Björn Bjelfvenstam) from a previous marriage, and a servant named Petra (Harriet Andersson). The plot kicks off when an old flame of Fredrik's, actress Desirée Armfeldt (Eva Dalhbeck) performs in a theater play Fredrik and Anne watch...

It was adapted as the Stephen Sondheim musical A Little Night Music, and loosely parodied in Woody Allen's A Midsummer Night's Sex Comedy.