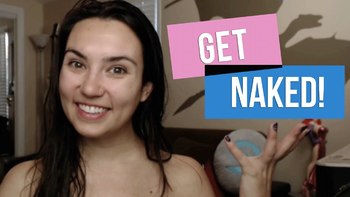 She's got nothing to hide.
Advertisement:

Trisha Hershberger is a vlogger and actress who first gained notoriety as a host on SourceFed. She was with the channel from 2012 to early 2015. After her departure, she made occasional guest appearances including in the final SourceFed video released in March 2017.

Since leaving SourceFed, Trisha has gained a following of her own producing solo content on her YouTube channel; she has become best known for her series The Naked Truth. In it, she vlogs naked about various topics. Trisha emphasizes that the series' nudity is not sexualized — hence why it is done from the shoulders up and no private parts are shown — but representative of being vulnerable and sharing one's true feelings without the pretense of clothes and makeup. Trisha encourages her followers to make their own responses to her videos. Some choose to do so naked, others prefer to remain clothed; regardless, Trisha has dubbed those who make responses the "Naked Army". She sometimes has guests on The Naked Truth, but with the exception of her husband these interviews are usually done via Skype so as to prevent Trisha and the guest from seeing each other fully nude. Also, while Trisha herself is not a nudist, the show has attracted some interest from the nudist community who praise it for demonstrating that simply being naked is not inherently sexual.

In addition to The Naked Truth, Trisha also does tech videos where she reviews the latest gadgets and the occasional DIY video. She has her own Twitch channel where she plays new video games and gives away prizes to her fans. She has also been interviewed on Reel Geek Girls.