Series / Living With Yourself 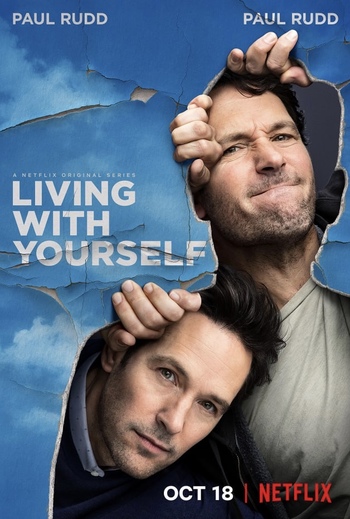 Living With Yourself is an American Netflix original comedy series that premiered on October 18th, 2019.

The series follows Miles Elliot (Paul Rudd), an advertising copywriter stuck in a dead-end job, a failing marriage and consequently stricken with ennui about his life. On advice from a co-worker, he decides to undergo an experimental new treatment which promises to rejuvenate him to the point where he's practically a new person. Unfortunately, Miles only realises too late that they mean this literally — the process creates a clone of Miles (Paul Rudd) who, much to Miles's chagrin, appears to be better at living his life than Miles is. The two consequently have to figure out a way of existing with each other without completely destroying Miles Elliot's life in the process — or killing each other.

Living With Yourself contains examples of: