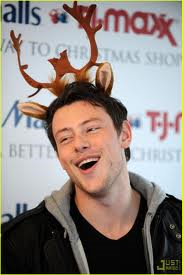 Cory Allan Michael Monteith (May 11, 1982 – July 13, 2013) was a Canadian actor and semi-musician. After dropping out of high school in grade nine, he worked several odd-jobs, including Wal-mart greeter, cab driver, roofer, school-bus driver, and car washer.

His acting career began in Vancouver, with bit parts in a plethora of shows such as Supernatural, Smallville, and two Stargates. He also had a recurring role as Charlie, Amanda's initial boyfriend in Kyle XY. He also starred in some lesser known horror movies like Hybrid and Killer Bash, both of which seemed to be banked on his incredible attractiveness. No really, the former has him shirtless throughout most of the movie because he is a werewolf; the latter was directed by David DeCoteau, famous for having his male actors appearing in shirtless homoerotic scenes for no purpose other than appearing in shirtless homoerotic scenes.

He eventually auditioned for Glee. His audition wasn't exactly like the others, the biggest difference being that he didn't actually sing. Which the producers found odd, since the show centered around people who sing. Instead, his tape included some acting samples and a clip of him playing the drums (on tupperware). While they liked him, the producers still wanted to hear him sing and, despite never singing a note in his life, Cory impressed them enough with a "cheesy 80s rendition" of Can't Fight This Feeling by REO Speedwagon that he was able to be beat out other auditioners, such as Aaron Tveit and Darren Criss.

Despite being a good actor and what amounted to the male lead in Glee, Cory hadn't exactly achieved as much as his other Glee co-stars. However, he had been gaining publicity - he co-hosted the 2010 Teen Choice Awards with his fellow Glee guys and Katy Perry, as well as the 2010 Gemini awards (they're Canadian). He was an accomplished drummer, and when not partaking in Glee he performed with his band Bonnie Dune. Cory also appeared in the 2011 Romantic Comedy Monte Carlo.

On July 13, he tragically died of a toxic combination of heroin and alcohol in a Vancouver hotel room.