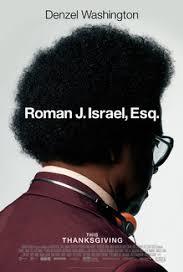 I don’t have another second to waste, telling people to not sleep so tight, trying to turn things around. Toward what? Some glory of fantasy over the real world? All I ever did was run around with too much to do, feeling guilty all the time, flat broke, it’s quite nearly killed me.
Advertisement:

Roman J. Israel, esq. is a legal drama written and directed by Dan Gilroy, starring Denzel Washington as the titular lawyer. Basically, take The Verdict and turn the characters and premise on its head, and you've got this movie.

Roman Israel is a brilliant, idealistic defense lawyer who is severely lacking in interpersonal skills, working in a small firm led by civil rights veteran William Jackson. When Jackson falls ill, Roman is forced to interact with opposing counsel and clients for the first time, which he botches horribly. When Jackson dies shortly after, Roman, incapable of running the firm on his own, is out of a job. When he has trouble finding a paying job that accords with his values, he takes a job at a large firm at the invitation of the high-powered former student of Jackson, George Pierce. Roman repeatedly tries and fails to exercise his passion for social justice, but a series of unfortunate events robs him of his idealism, making him decide to shift to a more mercenary worldview.

Despite its rather tepid reception, the film is considered to be one of Washington's finest performances, netting him several award nominations. It is unique among other films in the genre due to its scarily cynical and realistic focus on the legal industry itself.