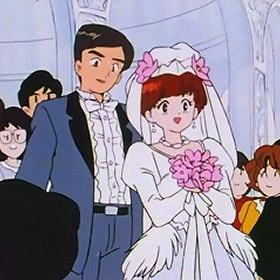 "Every Japanese is Shinto when he is born,
a Christian when he marries and a Buddhist when he dies."
Advertisement:

Most weddings in anime are Western-style (i.e. Christian or Christian-influenced) ceremonies, with Fairytale Wedding Dresses, tuxedos, and rings.

In Japan, the civil or religious ceremony of a wedding has no legal status — the actual marriage is enacted by filing the proper paperwork with the government and is all that is needed; anything else is simply an occasion for a party. Given that most Japanese do little more than give lip service to religion for most of their lives, it should not come as a surprise that they generally don't feel obligated to have Shinto or Buddhist ceremonies. In fact, for many Asian cultures (including Japan), traditional weddings tend to be long, complicated, and, even when compared to the most extravagant Western weddings, very expensive.

Western weddings started to become popular in The '80s, and there were two events that codified the trope itself. One was the televised marriage of actors Momoe Yamaguchi and Tomokazu Miura in 1980, and the other was the famous wedding of Prince Charles and Princess Diana in 1981.

Correspondingly, because of their "cool"/"romantic" factor, Western weddings are the way to go for most characters in Japanese media. And they're just more fun for the artist to draw, too.

The grooms, for whatever reasons, generally favor a style of tux not seen unironically in the Western world since about 1980. Ruffled shirts, tailed jackets, pastels and white-on-white seem to be the order of the day.

This isn't a Japanese Media Trope so much as a Japanese cultural trope (although the tuxes may be informed by media depictions). Other East Asian countries also prefer a western wedding instead of their respective tradition.