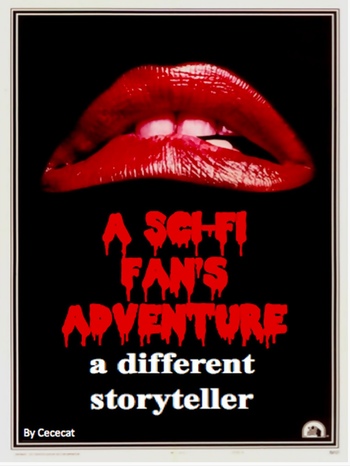 "I'd always loved science fiction movies. But never did I think I could get caught up in one…"
— The Opening Paragraph of A Sci-Fi Fan's Adventure
Advertisement:

A Sci-Fi Fan's Adventure is a fanfiction by ML Lanzillotta (aka Cececat). It's based on the 1975 cult film The Rocky Horror Picture Show . The first seven chapters take place during the movie, while the rest take place over the next year or so. It stars an Original Character named Fay... who happens to be the long lost daughter of the film's infamous Creepy Crossdresser. Fay is notably one of fanfiction's few lesbian original characters.

Though most of the fanfic follows the character Fay, a subplot involving two characters from the original film (Brad and Janet) was also featured. Fay was more popular with reviewers, though.

This fanfic is much more of a Science Fiction story than the film it's based on.

It contains constant references to:

The 27K word fanfiction was written in four days. Word of God says the author didn't sleep for much of that time.You can read it here: [1]