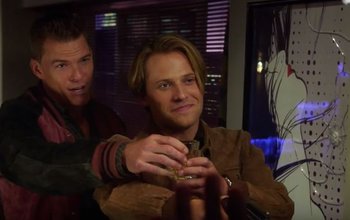 "Hitchcock and Scully" is the second episode of Brooklyn Nine-Nine's sixth season.

An investigation is launched into a drug bust that Hitchcock and Scully worked on back in 1986, resulting in the arrest of a mob boss. Wanting to get to the bottom of things, Holt orders Jake and Charles to interrogate the Nine-Nine's resident couch potatoes.

Believing that this investigation of Hitchcock and Scully is a part of Commissioner Kelly's ongoing harassment of his precinct, Holt, with Gina's assistance, prepares to launch a media campaign against the draconian policing methods the new commissioner is implementing throughout the NYPD.