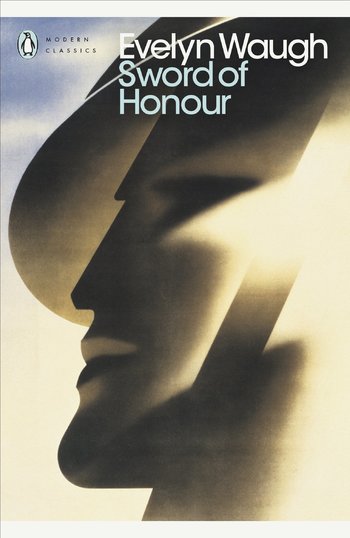 The Sword of Honour is a trilogy by Evelyn Waugh, drawing on his own experiences during World War II. The three books, later released as a single volume, are Men at Arms (1952), Officers and Gentlemen (1955) and Unconditional Surrender(1961).

The hero is Guy Crouchback, heir of a declining aristocratic English Roman Catholic family. He has spent his thirties at the family villa in Italy shunning the world after the failure of his marriage and has decided to return to England at the very beginning of the Second World War, in the belief that the creeping evils of modernity, gradually apparent in the Soviet Union and the Nazi Germany, have become all too clearly displayed as a real and embodied enemy.

Our hero attempts to join the British Army, finally succeeding (thanks to a chance encounter with an acquaintance of Guy's father) with the Royal Corps of Halberdiers. He trains as an officer and is posted to various centres around Britain. One of the themes is recurring "flaps" or chaos â€” embarking and disembarking from ships and railway carriages that go nowhere. Crouchback meets Brigadier Ben Ritchie-Hook, a fire eater and Apthorpe, a very eccentric fellow officer with an obsession regarding 'porpoises' (i.e: boots) and his prized portable commode.

Before being sent on active service, Guy attempts to seduce Virginia, secure in the knowledge that the Roman Church still regards her as his wife; she refuses him. He and Ben Ritchie-Hook share an adventure whilst on a top-secret mission in Dakar. Apthorpe dies in Freetown, supposedly of a tropical disease; when it is discovered that Guy gave him a bottle of whisky when visiting him in hospital (possibly the cause of death) Crouchback is sent home, having blotted his copybook.

Crouchback eventually manages to find a place in a fledgling commando brigade training on a Scottish island under an old friend, Tommy Blackhouse, for whom Virginia left him. Another trainee is a former showjumper Captain Ivor Claire, whom Crouchback regards as the flower of English chivalry. Crouchback learns to exploit the niceties of military ways of doing things with the assistance of Colonel Jumbo Trotter, an elderly Halberdier who knows all the strings to pull. Crouchback is posted to Egypt, headquarters for the Middle East theatre of operations. This involves him in the evacuation of Crete, where he acquits himself well, though chaos and muddle prevail. At this time he meets Corporal Ludovic and they and a few others escape in a small boat, a most perilous undertaking. Eventually they are rescued, delirious with thirst and exposure and taken back to Egypt, where Mrs Stitch, a character who turns up in other Waugh books, takes him under her well-connected wing and equally tries to protect Claire, who has also blotted his copybook. She sends Crouchback the long way home to England, where once more he finds himself in his club asking around for a suitable job. Thus ends the second book.

Crouchback spends 1941-43 in Britain, mostly at desk jobs. He turns 40 and, with Germany's invasion of Russia and Britain's subsequent alliance with the Soviet Union, feels the futility of the war. American soldiers are all over London. Virginia has fallen on hard times and is reduced to selling her furs. She had been persuaded to accompany Trimmer, her former hairdresser who was set up as a war hero for media consumption. She becomes pregnant by him and searches futilely for an abortionist. Eventually she decides to look for a husband instead. Crouchback is chosen for parachute training prior to being sent into action one last time. Before he goes abroad, they are reconciled and remarry (resume their marriage, in the eyes of the Roman Church). Virginia stays in London with his elderly bachelor uncle, Peregrine Crouchback and has her baby there. Despite being incorrectly suspected of pro-Axis sympathies because of his time in pre-war Italy and of his Catholicism, Crouchback is posted to Yugoslavia, where he is appalled by the Partisans, befriends a small group of Jews and finds out that his former friend de Souza's loyalties are with Communism rather than with England. While Crouchback is overseas, a German doodlebug hits Uncle Peregrine's flat and kills him and Virginia, sparing Virginia and Trimmer's son, Gervase, who is in the country with Crouchback's sister.

After the end of the war, Guy meets the daughter of another old Roman Catholic family and marries her. This is doubly ironic in that she has become the carer for Virginia's son by Trimmer; it is never clear whether Guy knows of the child's actual parentage.