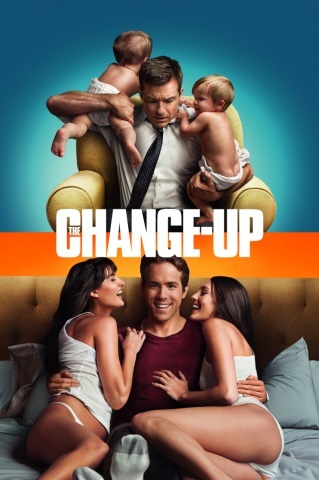 The Change-Up is a 2011 comedy directed by David Dobkin (Wedding Crashers, The Judge) and starring Jason Bateman and Ryan Reynolds.

Dave Lockwood (Bateman) is a lawyer with a boring daily routine and an almost crumbling marriage. His best pal Mitch Planko (Reynolds) is an actor wannabe, single and living a hedonistic life of marijuana smoking and meeting women. After one night of drunkenness, Mitch and Dave pee in front of the statue of a fountain and they wish of switching their lives. The next day, their wish comes true with Dave inside Mitch's body and Mitch's inside Dave's body. They return to the fountain, only to find out that it got placed in another location. While they wait for the response of the bureaucratic parks department, they decide to live the other's life and routine - not without meeting difficulties while trying to adapt, of course. Hilarity Ensues.