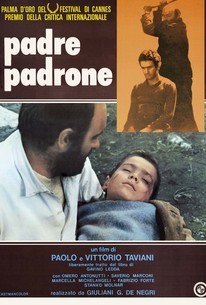 Padre Padrone is a 1977 film by Vittorio and Paolo Taviani. The English title might be "Father and Master" though it is frequently untranslated.

It is set in the village of Siligo in Sardinia, and focuses on the Ledda family, particularly the domineering father and his sensitive son, Gavino. Life is very harsh there and the father exploits his little son. First he takes Gavino from school at the age of six to be a shepherd. When the boy tries to run away, his father beats him brutally.

Years pass, and Gavino becomes a man in his early twenties, still completely subdued to his father. To quit the farm he first unsuccessfully tries to become a guest worker in Germany, but his father doesn't give permission and Gavino has to come home. Later he enlists in the Italian army and becomes educated, not only learning to read but showing a talent for languages. On his return from the army he finally stands up to his father.