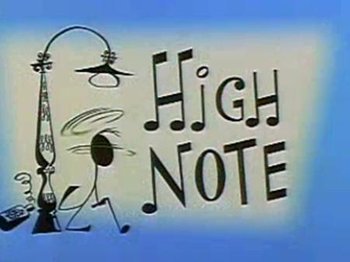 It doesn't have any of the classic characters and doesn't involve the voice talents of Mel Blanc at all (except for a hiccup). It is a dialogue-free cartoon concerning the sheet music for a performance of "The Blue Danube" by Johann Strauss. We see a squadron of anthropomorphized musical notes literally constructing the sheet music, laying out lines that form the staff, bending a long line as if it were an iron bar into a G-clef. Having all the construction on the paper completed, the various notes take their place. A conductor note starts off the performance, and we hear the music of "The Blue Danube".

Except we only get a couple of bars into "The Blue Danube" when the music comes to a halt. There's a missing note. It turns out one note has gone off into the sheet music for "The Little Brown Jug" and gotten rip-roaring drunk. The conductor note tries to get the drunk note into its rightful place on the top line, but the drunk note refuses to cooperate. A merry chase ensues as the drunk runs all over the page.

See also "Hypothese Beta", a 1967 animated short that uses a similar conceit but with holes in a computer punch card.