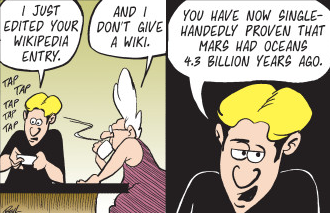 A character edits a wiki - be it Wikipedia or any other free info source - and adds information which is gibberish or they know to be false, to make a practical joke, to mislead someone who's been using this source without testing it, or just for the sake of it. Hilarity Ensues... but only for the person in question.

May provoke some viewers/readers to ape the fictional Wiki Vandal by vandalizing the real-life Wikipedia article in question.

See also Wiki Vandal for info on people who actually do this in real life and ways to counter them.

Please note: no Real Life examples, unless they were directly caused by media.