The Dwarven characters from Peter Jackson's The Lord of the Rings and The Hobbit film trilogies that are not a member of The Fellowship or The Company.
open/close all folders
Advertisement:
In General

Great craftsmen who live in mines and palaces under the Earth. Small like Hobbits but physically much tougher than nearly any other Free Peoples, except maybe the Ents.
Thráin 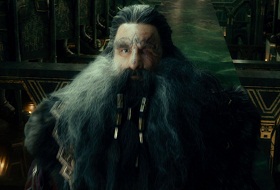 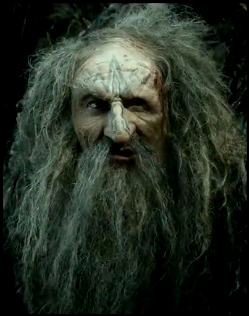 Appears in: An Unexpected Journeynote Flashback | The Desolation of Smaug | The Battle of the Five Armies

"Azog means to kill us all! One by one, he will destroy the line of Durin! But by my life, he shall not take my son! You will stay here!"
Father of Thorin and previous King of Durin's Folk. Died in the dungeons of Dol Guldur, but not before encountering Gandalf and giving him the map and key needed to get into Erebor. Also lost Durin's Ring of Power to Azog.
Thrór

Thrór, King Under the Mountain 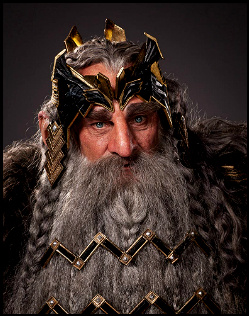 Father of Thráin and grandfather of Thorin. Previous King of Erebor, once the mightiest of the Dwarf Lords and the first owner of the Arkenstone. He unsuccessfully attempted to reclaim Moria, but was unable to do so in the face of heavy casualties and the presence of Durin's Bane, not to mention his own death in combat against Azog the Defiler.
Dáin Ironfoot 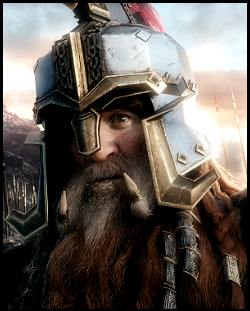 "I will not stand down before any elf! Let alone this faithless woodland sprite!"

Appears in: The Battle of the Five Armies

"Good mornin'! How are we all? I've a wee proposition if you wouldn't mind giving me a few moments of yer time. Would ye consider... just SODDING OFF!"
Lord of the Iron Hills, to the east of Erebor, and kinsman of Thorin. Future King of Durin's Folk and King Under the Mountain.

And then he's pretty happy and confident about knocking the elves and Men into the ground.