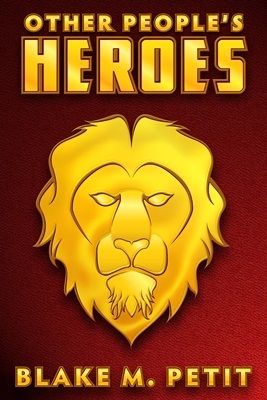 Other People's Heroes is a 2002 superhero novel by Blake M. Petit, first released serially online as an audiobook. Josh Corwood is a reporter for Powerlines, a magazine dedicated to the Capes and Masks (heroes and villains) of Siegel City. Josh has a particular interest in heroes, having been saved from a fire by Lionheart, one of the founding heroes of the city, now disappeared. After a disappointing interview with one of the local Capes, and his promoter, Josh realizes that he has powers of his own. Or, rather, he can acquire the powers of others when they're in close proximity to him. And so he devises a costume and sets out to fight crime, only to find out that his life is a lie.

The conflict of capes and masks is all kayfabe, organized by one man with a vision. You see, actual battles would lead to destruction and casualties, but if the fights are choreographed, the damage can be minimized and the drama maximized. The storylines are orchestrated, the superpowered people regularly change their costumes to play a different hero, and actual crime is deterred because it's obvious that the good guys always win. Josh, offended by this mockery of heroism, decides to expose it the best way he knows how. What he didn't count on was falling in love, both with the job and with a certain Mask...

The book has been followed up by a handful of short stories and a prequel novel, The Pyrite War.