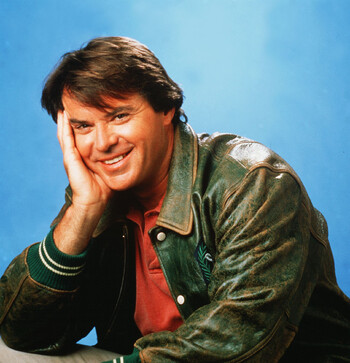 He was married to actress Barbara Rucker and Heather Menzies, and had three children with Menzies.

Can be seen as the Spiritual Predecessor to Timothy Olyphant due to the Celebrity Resemblance between the two, both physical appearance-wise and filmography and recognition-wise with his well-known leading television detective roles Dan Tanna from Vega$ and Spenser from Spenser For Hire being each a decomposite Spiritual Predecessor to Olyphant's own well-known leading television detective role Raylan Givens from Justified and his Lonesome Dove character Jake Spoon being a Spiritual Predecessor to Olyphant's Seth Bullock from Deadwood (the only significant physical difference between Olyphant and Urich when they both reached their fifties is while Urich had let himself go, was no longer in his prime and would pass away at age 55 from synovial sarcoma, Olyphant is currently still in good slim shape like he was before and a Silver Fox).