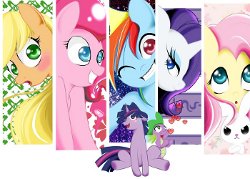 It's just like Infinite Stratos. But with ponies.note Sadly, no awesome Powered Armor, though.
Advertisement:

Twilight Sparkle was never born. As a mare, anyway. Instead, this story stars the young colt Dusk Shine, personal protégé of Celestia, asocial bookworm, and (unknownst to him) super-cute pretty boy.

When Celestia sends Dusk Shine to Ponyville, all he wants to do is prepare for Nightmare Moon’s return. But when five certain mares each develop a massive crush on Dusk, he’ll have more on his plate than Twilight ever did.

TL;DR: My Little Pony: Friendship Is Magic mixed with Harem Comedy. Word of God is that all Harem Genre hijinks are intended as an experiment to see how well the anime genre carries over. So far, the experiment is going swimmingly. Your mileage may vary, though, as some dislike it for the way the characters act compared to their canon personalities, especially "Dusk" himself. However, meme decided to go ahead and cancel the fic upon uploading the second chapter of the Sonic Rainboom arc.

The artist who contributed the cover art has started a manga adaptation of it here.

NOTE: The author is apparently a troper. He's even been pointing tropes he deliberately invoked/noticed as he went along. As such, we've thrown his responses in verbatim. Such are the cases for the YMMV bullets.

The fic was under a bit of Retcon after it changed authors, but only one chapter was ever published. The original author, meme-asaurus, has cancelled the original fic, and its continuation on by the name of "The Unexpetected Love Life of Dusk Shine Continues" has been hidden

, and the author ( White Rabbit