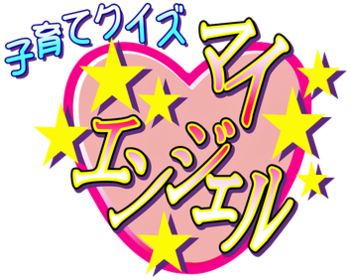 Kosodate Quiz: My Angel （「子育てクイズマイエンジェル」in Japanese, literally translated as “Parenting Quiz: My Angel”) is a game series made by Namco, the combination of Raising Sim and quiz game where you can take role as a father or/and mother who raise(s) a child from baby (0 years old) to 25 years old adult.

The game is simple: answer the child’s questions about various knowledges, if you answer correctly, you will get child raising funds and the affinity increases. However, if you choose the wrong answer, it will reduce one heart point. When the heart point reaches zero, it game will end with standard Game Over screen (in arcade versions, the game gives you a chance to continue by inserting coins before the time is running out, but in console version, it will return you back to start screen). Every quiz stages cleared followed by your choice in Event Flag scenes after you cleared the age stage, it increases certain parametersnote  “Sexy” （色気）, “Mischief” （わんぱく）, “Geeky“ （おたく）, and “Dilligent” （まじめ）. The final highest personality parameter changes the appearance every yearnote (Sexy / charming / pretty when the “Sexy” is the highest, tomboyish and energetic in “Mischief”, nerdy in “Geek”, and normal / mature / pure in “Dilligent”).

The early ages tend to be easy general knowledge genre questions, but as the the child grows up, the questions tend to be more and get harder.