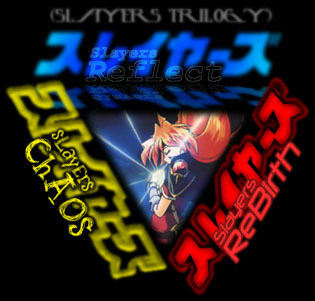 Somewhere beneath the shining sun, somewhere in the green and fertile lands the world, somewhere in the city/state of Sailoon, somewhere on the grounds of the Happy Traveler's Mega-Inn and Conference Center, something exploded.
What starts as a simple quest to find some long lost magic eventually steamrolls into a battle for the fate of the world, digging deep into the backstory of Slayers (which I mostly made up as I went along, so canon twonks need not apply.)
Advertisement:

Begun in 1998 by Twoflower (If his name sounds familiar, it's probably because you've read or heard of one of his other works, Sailor Nothing), Slayers Trilogy is what TF calls a "dramedy epic trilogy", which sums up the premise rather nicely. The story begins when Lina accidentally breaks a priceless magical artifact belonging to the Sailoon royal family, one with the potential to open up a whole new school of magic. At risk of being lynched by Sailoon's citizens, Lina (and Gourry) agrees to go a-questing for the means to reconstruct the artifact, and sure enough Zelgadis, Amelia, Xelloss, and Naga manage to get caught up in their quest along the way. But what starts as "just another adventure" quickly snowballs into an epic battle with the fate of the Red World hanging in the balance. And that's just in Reflect.

Chaos continues the story by building on the consequences of the events of Reflect when Lina accidentally casts a spell that completes an ancient prophecy tied to the Lord of Nightmares. Charged by L-sama Herself to "gather the wingless", Lina and Gourry set off once again to save the world by almost blowing it up, this time delving into the ancient history of the Red World and the mythic origins of the human race.

And last but not least, everything comes together in ReBirth when the true conflict behind the Trilogy finally comes to light. Lina's completion of L-sama's quest comes just in time for Shabranigdo's remaining generals to launch the Third Mazoku War and Sailoon is set to be Ground Zero for a cataclysmic battle between the mazoku and the dragons. As Lina and the gang help Sailoon prepare for the worst, news comes from a tribe of chimera that one of several artifacts called The Most Important Things In The World has been stolen from them by a girl whose description, according to Xelloss, matches that of the Knight of Shabranigdo, Luna's opposite number. As the great powers of the world assemble for an epic showdown, Lina and the crew embark on a race against time to claim the remaining artifacts before either the mazoku or the dragons can lay hands on them. This is no mere Fetch Quest; the clock is ticking, the bad guys are already two steps ahead of them, and this time failure will come with consequences beyond imagination...

On top of being an epic story in every sense of the word, Slayers Trilogy is also one of the very finest examples of Original Flavor that can be found on the internet; Twoflower's work combines action and drama on a grand scale with the quirky slapstick humor that characterized the anime with such perfection that one wonders sometimes if Stefan Gagne isn't a pen name for Hajime Kanzaka. And this is before you get into the HTML coding that accompanies and enhances the reading experience.

Once upon a time in fair Sailoon, there was a sorceress.
Let's call her Lina.
Lina was known across the land for a variety of reasons. She was a famous bandit hunter, magic slinger, world saver, and consumer of large dinners. With no fixed address, she wandered the world doing random quests and getting into surprising amounts of trouble. In recent times, her and her usual gang of cohorts managed to find a lost power, unearth a deadly danger from beyond space and time, and save the world from it; all in the span of a few weeks.
That's just the sort of person Lina was, always active, always leading an exciting life. Randomly moving from situation to situation. She was like a monster reincarnation of some hero long gone; a girl on the move, just lucky enough to be totally confident.