Fanfic / Empire of the Pacific 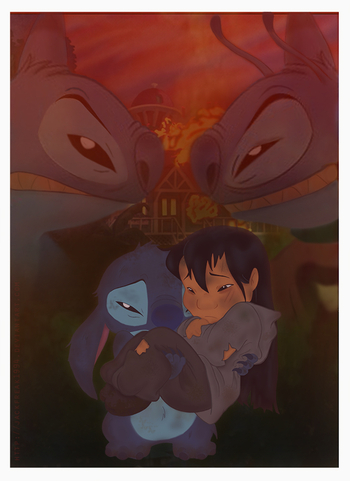 Fan Art for the fic by Diana Barron.

If Lilo could go back in time to save her parents, then they could all live as one huge happy ohana. But she would be dead wrong, and the world may pay the price for her naivete.
—Summary to Empire of the Pacific
Advertisement:

Empire of the Pacific

is a 2005 Lilo & Stitch Fanfic written by DaveNevius

(known as WatsonSword at the time of the fic's publishing).

Lilo finds herself missing her parents again as she remembers the night of the accident that killed them, which she was actually in.note According to this fic; the official canon does not provide much details about the car accident, but it does not imply that she was in the car at the time. She and Stitch use Jumba's time-traveling surfboardnote from the Lilo & Stitch: The Series episode "Melty" to go back in time to that night and she has Stitch rescue them in order to have them alive with her newly-extended ʻohana.

However, what she does not realize when she and Stitch go back to the present was that, as a result of saving their lives that night, she and Stitch never met after he crash-landed on Earth. Since she never needed to go to the animal shelter, she does not meet Experiment 626 there and he does not get rehabilitated, and the duo are now in an Alternate Timeline where 626 has become a cruel and commanding emperor of a Polynesia under his control and his influence is expanding.

After the time board gets confiscated, stranding the duo in this horrible timeline, they must work with a dwindling resistance in order get the board back and save the world from the clutches of Emperor 626.