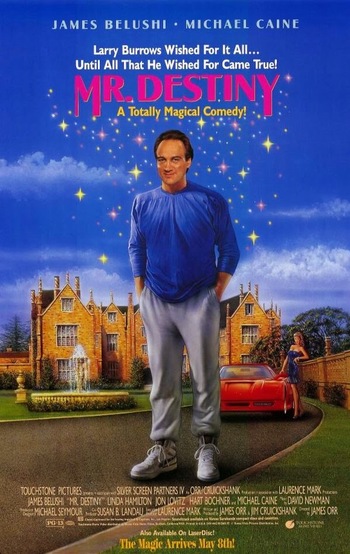 Mr. Destiny is a 1990 comedy about Larry Burrows (James Belushi), a simple man living in the suburbs working a menial job in a large company, along with his wife, Ellen (Linda Hamilton), and his best friend, Clip (Jon Lovitz). The pressures and misfortunes begin to weigh on Larry, and he attributes his woes to having missed a ball at a high school baseball game.

As Larry regales his troubles at a bar while waiting for a tow for his broken car, the bartender Mike (Michael Caine) mixes him a special drink. This drink turns time on its side and sends Larry to an alternate reality where not only did he hit that winning ball, but he's advanced in his company, is filthy rich, and is married to the boss' daughter (Rene Russo).

Now everything is perfect. Larry hasn't a care or fret in the world now that he's wealthy and powerful...right? Rriiiiight?