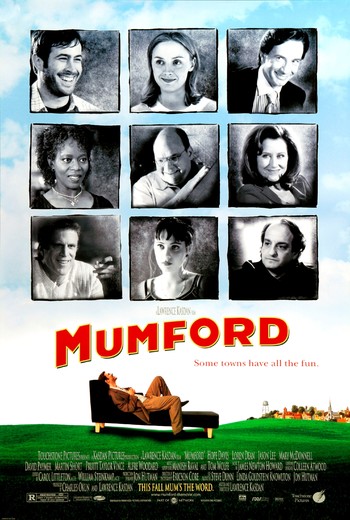 Mumford is a 1999 comedy-drama film written and directed by Lawrence Kasdan.

Dr. Mumford (Loren Dean) is a psychologist who lives in the small town of Mumford. He has a thriving practice with a number of patients, including a woman addicted to shopping (Mary McDonnell), a high school girl with an eating disorder (Zooey Deschanel), a drug store owner with a perverse fantasy life (Pruitt Taylor Vince), and a billionaire software developer who simply wants Mumford to be friends with him (Jason Lee). One day, Dr. Mumford gets a visit from Sofie Crisp (Hope Davis), a woman who's suffering from Chronic Fatigue Syndrome. He and Sofie soon develop feelings for one another, which of course, is against all professional ethics for psychologists. Except that Dr. Mumford isn't really a psychologist...

While the film received good reviews, it wasn't a big hit upon release, but has since gained somewhat of a cult following. Not to be confused with Mumford & Sons, or The Amazing Mumford from Sesame Street.