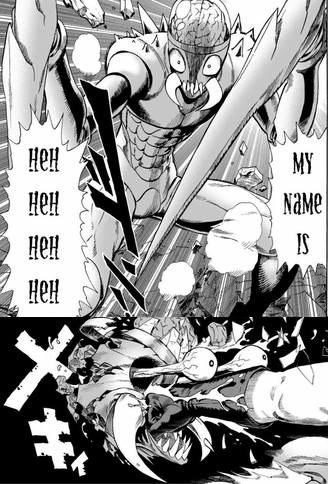 No matter what the medium or genre of a work of fiction is in, there are a few general rules that are usually in place. One of them is that if a character isn't a Red Shirt, it doesn't matter if they're in a situation of dire peril as long as they're speaking. Because as long as they're talking, nothing bad is going to happen to them. Oh sure, they can die after saying some notable Last Words or an important Final Speech, but dying in the middle of a sentence, especially if it's an ordinary, unimportant one? That's not going to happen, ri—GHAAAAACKKK!

There are any number of reasons to kill a character, whether major, minor, or mookish, in the middle of a sentence. Firstly, in an Anyone Can Die story, it's a great way to show that not only can anyone die, but they can die at any time. (Which can make for great drama and suspense over the fates of your favorite characters). Secondly, it can be a great way for an Anti-Hero to show off his No-Nonsense Nemesis nature by killing an antagonist in the middle of some sort of threat, or as a more lethal version of Talk to the Fist. (Likewise, it can be a way to show a villain avert the classic Why Don't You Just Shoot Him? scenario). It can be a way of showing that a story is on the gritty and cynical end of the Sliding Scale of Idealism Versus Cynicism. Lastly, it could just be that the author doesn't care much for interminable Final Speeches, and chooses to subvert that trope.

One thing is for sure: when this trope happens, you know that this is for real. If the story was a light, not too serious sort before, it's just gotten a whole lot darker and more serious after this.

See also Deadline News when this happens on the other side of a TV screen (though not necessarily in the middle of a sentence).

If this is a sci-fi story and the scientist figures out how to destroy the alien monster, expect him to die halfway through his explanation, just as he's about to say that it can only be destroyed by—

Phew... I can't believe we made it through tha—URK!
DED! Not big surprise.