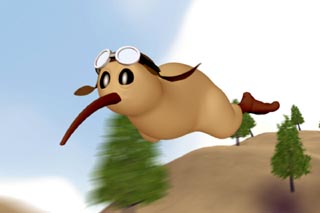 Kiwi! is an animated short made for creator Dony Permedi's master's thesis in animation. It tells the story of a very determined kiwi bird who works to accomplish his dream. At only two minutes and thirty seconds long, it might have the shortest "start-to-tearjerk" ratio of any cartoon around.

Due to the short's nature, there will be unmarked spoilers below.

This animated short provides examples of: