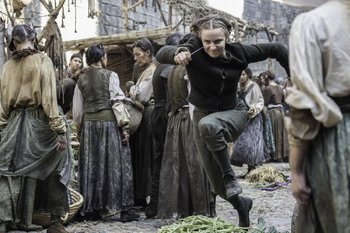 In Braavos, Lady Crane movingly performs her role as Cersei grieving over Joffrey's death again. She seems to have taken Arya's advice that Cersei would be angry at her son's death. After receiving applause (the first time this rabble has applauded anything other than Toilet Humor on the show), she returns to her dressing room, hears something, and cautiously opens her wardrobe to find Arya hiding inside. She brings Arya back to her home, dressing her wounds. Arya comments on her skill, wondering where she learned to do this. Lady Crane says she is a jealous women, and was often in relationships with bad men. She'd get angry with them for cheating, fight, and put holes in them. Afterward she'd patch them up again, and grew good at it. And good at putting holes in them, Arya says, to Lady Crane's amused agreement. Arya wonders where Bianca, the actress who hired the Faceless Men to kill her, went. Lady Crane says she'll have a hard time working as an actress after what she did to her face. She says the company is moving to Pentos soon, and that Arya should go along with them, feeling she'd be a good actor. Arya refuses, saying she couldn't remember the lines, and they'd be in danger anyway while the Waif is hunting her. Lady Crane asks where she'll go, and Arya says she'd like to go find out what's west from Westeros, which is not on any map. Lady Crane gives Arya milk of the poppy for her pain, and she goes to sleep.

However, Arya's rest does not last long, because the Waif manages to find her, killing Lady Crane before moving on to Arya. Arya runs away, her wounds opening again, and leads the Waif to her hideout, where she cuts a lit candle to plunge the room in darkness. Then, at the House of Black and White, Jaqen finds a blood trail that ends in the Waif's face... and Arya's sword to his back. Jaqen congratulates her, saying she is finally No One, but Arya proudly proclaims her name is Arya Stark and leaves for Westeros.

In the Riverlands. Sandor Clegane comes across a group of men, among whom were two that helped commit the massacre. Wielding his ax, he swiftly and brutally kills them all.

The next day, he comes upon the Brotherhood Without Banners, including Beric Dendarion and Thoros of Myr. They are preparing to hang the men whom he has been pursuing for the same reason Sandor wants them dead, since it transpires that the Brotherhood did not authorize the attack. Due to his loss, they agree Sandor can kill two. He approaches one to kill him with his ax, but they insist on hanging instead. At last he reluctantly agrees. Before the man even stops kicking, Sandor steals Lemoncloak's combat-ready boots and swaps them with his work shoes. Afterward, Beric and Thoros try to persuade him to join their campaign, but Sandor notes that didn't work out when he tried the last time. Thoros, just as Brother Ray had, says things happen for a reason. Sandor again is unimpressed - after all, lots of horrible shit happens for a reason. Beric echoes Brother Ray's words that he can still help, and that it isn't too late for the man who was once the Hound to do some legitimate good in the world. This time, Sandor seems to take it to heart, and weighs his options.

In Meereen, a Red Priestess preaches to people that Daenerys was sent by the Lord of Light as their savior. Tyrion and Varys walk through the market toward the harbor. Tyrion comments that their alliance with the High Priestess is paying off, with the message of her preachers bringing life back into the city. Varys is still uncomfortable with it, though, warning that this may backfire against them. He is going back to Westeros in hopes of finding Daenerys new allies and ships. Tyrion replies they need her most of all, and Varys assures him she will return before departing.

In the great pyramid later, Tyrion is sitting with Missandei and Grey Worm. Happy over the revival of the city, he urges them to drink with him. Though reluctant, they accede at his urging. Wistfully, he says he'd like to own a vineyard himself in the future after Daenerys has won. He tries to get them telling jokes, but fails. He instead tells them a Westerosi joke, but it falls flat with them. With his urging and the effect of the wine, Missandei manages to tell a weak joke herself. Grey Worm even manages one himself, and we see him actually smile for the first time. The bells begin ringing, interrupting, and they run to the balcony, seeing a fleet of ships bearing the harpy emblem of the Masters of Yunkai and Astopor approaching Meereen. Grimly Missandei says they have come for their property.

That night, the city has begun to be bombarded by the fleet, with fires starting from their flaming missiles. Tyrion admits his error, but urges them to defend the city from the beaches. Grey Worm dismisses his suggestion, saying the pyramid is the only defensible spot in the city, where they will wait. Suddenly they hear a great crashing sound from the roof overhead. They prepare to fight, but it is only Daenerys, returned at last to help them just when they need her most.

In King's Landing, Qyburn tells Cersei a group of the Faith Militant have come into the Red Keep. She asks who let them in, and he does not answer, but Tommen is aware they are there so it's implied to be him. Cersei confronts them alongside Qyburn and Gregor Clegane. Lancel is leading them, and says the High Sparrow wishes to speak with her in the Great Sept of Baelor. She declines, but he says this is not a request. After she still will not go along, they attempt to take her by force, but Clegane steps in. Lancel tells her to have him step aside or there will be violence. Cersei retorts that she chooses violence. One of the Faith Militant strikes at Clegane, but with no effect, only embedding the spikes of his club into Clegane's chest. Clegane lifts him up by his throat and throws him down the stairs. As the others retreat warily, Clegane picks up the man once more. With his bare hands, he rips out the man's head and spine. Cersei watches with satisfaction, and says the High Sparrow is welcome to visit her in the Red Keep at any time.

Later, in the great hall, Cersei enters with Clegane and Qyburn. She speaks to her uncle Kevan, who confirms there will be a royal announcement, but does not answer when Cersei wonders why no one told her. He stops her when she tries to take her place beside the throne, sending her to the gallery with the noblewomen instead. Cersei reluctantly goes there instead as Tommen takes his seat on the throne. He announces that her and Loras' trial will begin soon in the Great Sept of Baelor. Trial by combat is also hereby abolished, as he characterizes it as a scheme for corrupt and brutish nobles to avoid true justice. Instead they will face seven septons as their judges, to Cersei's dismay. Afterward, Qyburn reports to her that an old rumor Cersei had him look into has turned out to be far more than that...

At Riverrun, Brienne and Podric ride to the Lannister camp. As she meets with Jaime, Bronn ambushes Pod playfully and teases him by saying the pair are having sex, then offers to teach him "real" fighting when Pod mentions Brienne is training him in swordfighting. Jaime and Brienne reminisce over all that has happened since they last met. He congratulates her on fulfilling her oath to Catelyn Stark by finding and rescuing Sansa, saying he didn't think it would happen. However, as she is a suspect in Joffrey's murder still, this is a complication. At last he asks what she's doing here, and Brienne says she came for the Blackfish, hoping to use his troops to help retake Winterfell from the Boltons. Jaime notes they are occupied, given they're under siege. They argue over the rights and wrongs of the situation before Brienne proposes he permit her to enter Riverrun under flag of truce and convince the Blackfish to surrender, then give them safe passage into the North with his troops. Jaime is incredulous, warning her that he's even more stubborn than she is. Nonetheless, he agrees, hoping that at least the Blackfish's troops might listen. Jaime gives her his word they will have safe passage if she succeeds. Brienne tries to give him back his sword, but Jaime tells her to keep it. She warns that if her attempt fails, she'll be duty-bound to defend Riverrun along with the Tullys, being Sansa's kin. He is not surprised, simply hoping it won't come to that. In the castle, the Blackfish again refuses to surrender, and is skeptical that Brienne really represents Sansa. He is especially suspicious given her prior association with Jaime. Brienne at last convinces him of her bona fides, but he refuses the proposal still. Defeated, Brienne has Pod get a message to Sansa by raven saying she failed.

That evening, Jaime visits Edmure Tully in the tent where he's kept prisoner. Jaime talks with Edmure of his son, whom he sired with his wife on the night of the Red Wedding (who he has not seen), and offers both of them a comfortable life in Casterly Rock. Edmure, disgusted, is incredulous and wonders if Jaime really thinks he's a decent person after all that he's done. He wonders how Jaime lives with himself. Jaime says he cares only for his sister, wanting to return and be with her no matter the cost. He has to take Riverrun for that, and threatens to kill Edmure's son. We next see Edmure approaching the castle and demanding to be let in. The Blackfish tells the commander not to, but he says Edmure is lord of Riverrun and they must obey him. Over the Blackfish's strenuous protests, they let Edmure in. He orders all of the troops to lay down their arms and surrender. The besiegers enter the castle unopposed and take them prisoner. Edmure orders that the Blackfish be taken prisoner and handed over to the Freys. The Blackfish is meanwhile leading Brienne and Pod off to an underground boat they can escape on. Brienne begs him to come along with them, but he refuses, and goes off to fight. A Lannister soldier tells Jaime that he was killed. He spots Brienne and Pod on the boat, but rather than pursue them, waves goodbye.