Characters of Who Framed Roger Rabbit.

Each spoiler in Roger Rabbit and the Mastermind's entries will remain unmarked. You Have Been Warned. 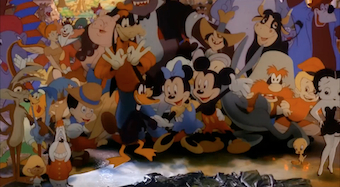 In the universe of the movie, cartoons, or "toons" as they're informally referred to, are living, sentient, animated lifeforms comprised of ink and paint who co-exist with humans in the real world. Originating from Toontown, a walled-off animated metropolis adjacent to Los Angeles, they're mostly known for their amusing and hilarious antics which gets varying human reception as humor is seemingly the sole driving force behind their reason for being. Toons come in many forms and are often anthropomorphic or caricatured versions of humans, animals, plants, machines, inanimate objects, etc. Treated like second-class citizens during the events of the film, work for them is mostly relegated to "live"-animated film productions. Many of the toons featured in the film include icons from The Golden Age of Animation.

Cartoon characters who appear or are referenced in the film: 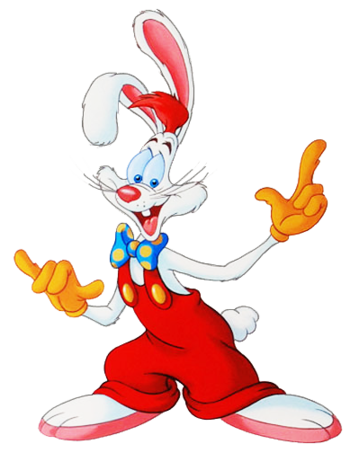 The eponymous A-List cartoon star rabbit who gets framed for Marvin Acme's murder because his wife Jessica supposedly had an "affair" with him.

The most popular character of the film for one or two obvious reasons.

A sultry, voluptuous toon-human lounge singer/actress and Roger’s wife, who has been made into a sex symbol — both in and out of the movie, surpassing Betty Boop — and seeing what she looks like, it's pretty justified. 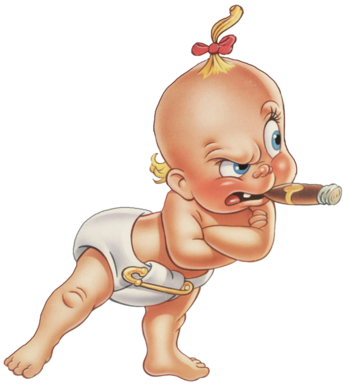 He acts much older off-screen.

"My problem is I got a fifty-year-old lust and a three-year-old dinky."

A rude, crass toon-human baby... who has been a baby for 53 years, as well as Roger’s friend and co-worker in the movie business. 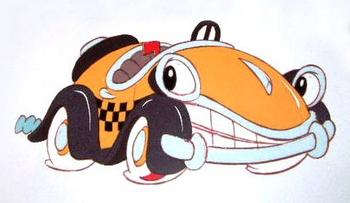 A foul-mouthed, super fast cartoon taxi cab that is friends with Roger. He apparently has a history of run-ins with the law due to his rather chaotic driving skills and has the supernatural ability to appear whenever someone sticks out their thumb. 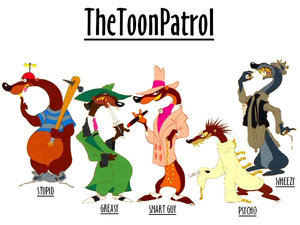 Eddie Valiant: Weasels!
Judge Doom: Yes, I find they have a special gift for the work.

The Quirky Miniboss Squad comprised of toon weasels that Judge Doom hired to catch Roger Rabbit who bear a strong resemblance to the weasels from Disney's The Adventures of Ichabod and Mr. Toad. Their names are Smart Ass, Greasy, Wheezy, Psycho and Stupid, but you'd only know that if you read the credits and scripts. 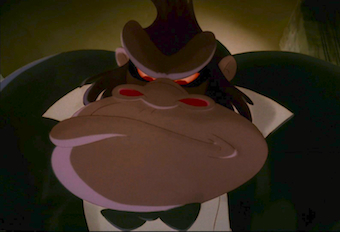 "Don't let me catch your peepin' face around here again, got it?"

A big, grumpy, intimidating toon gorilla who's the bouncer at the Ink-N-Paint Club. 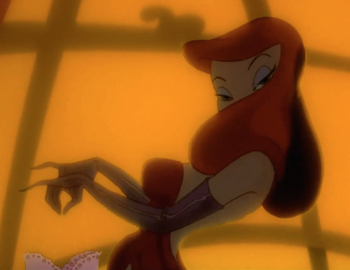 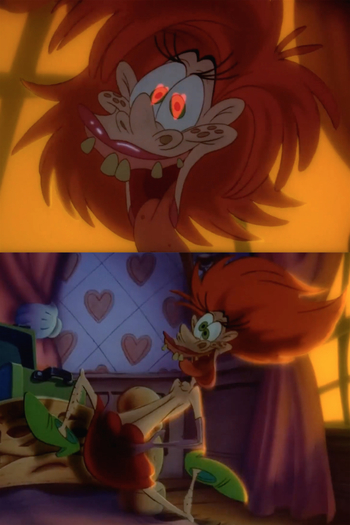 A comically hideous, psychotic, Love Hungry toon woman in Toontown who relentlessly chases Eddie after he mistakes her for Jessica Rabbit. A minor bit character with only about thirty seconds of total screen time, she still manages to have a skyscraper of tropes on her resumé. 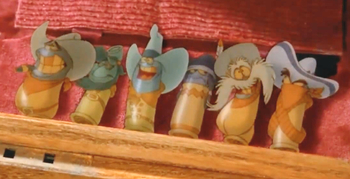 A group of six wild, fun-seeking, .38 toon bullets for Eddie’s toon revolver. After years of sleeping in the gun case, they're awakened when Eddie pursues Jessica Rabbit into Toontown. Though they’re never named in the movie, they’re depicted as a portly, cigar-smoking cowboy with Pat Buttram’s voice; a tobacco-chewing Civil War soldier a.k.a. “Chews Tobacco”, a cavalryman (in the voice of Walter Brennan), a Native American a.k.a. “Says Nothing”, a mustachioed cowboy who sounds like Andy Devine, and a masked bandit a.k.a. “Shifty Eyes”. 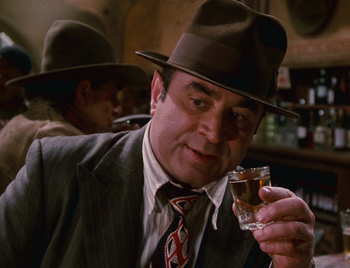 Grizzled ex-cop and Private Detective who slipped into alcoholism and developed a bitter antipathy against toons after his brother Teddy was murdered by one while investigating a case in Toontown. He is hired to take some "dirty pictures" about Jessica Rabbit's "affair" with Marvin Acme, but is pulled into the murder investigation (against his will) after Acme gets murdered and Jessica's husband, Roger is framed for it. 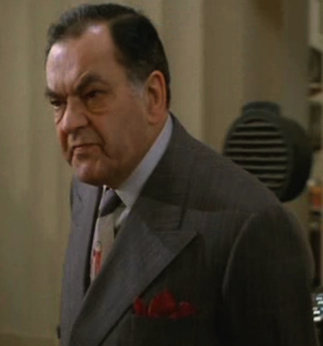 "I'm a cartoon maker, not a murderer."

Well-known cartoon producer in Hollywood and studio head of Maroon Cartoons. Cloverleaf approached him with an offer to buy the Maroon Cartoons studio for a generous sum, on the condition that they would buy it only when Marvin Acme sold them his properties — which included Toontown. Acme refused, so Maroon made Jessica pose for the patty-cake photos with Acme and arranged for Eddie Valiant to snap the pictures, in order to have something he could use to blackmail Acme into selling.

At some unspecified point after Acme was murdered, he connected the dots and realized that Cloverleaf was going to destroy Toontown to build the freeway after claiming it as theirs, as Acme's Last Will and Testament had gone missing and thus could not be executed. He was understandably horrified — being a cartoonist and a man who loved toons, and all — and wanted to find Acme's will to prove someone had a legitimate standing claim to Toontown in the event of Acme's death so that Cloverleaf couldn't get their hands on it. 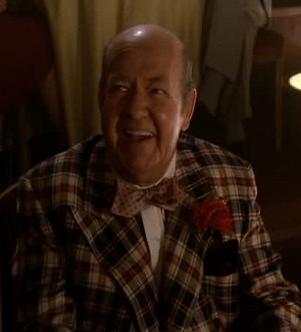 Also known as "The Gag King", Acme is the eccentric, prank-playing CEO of his eponymous corporation and owner of Toontown. 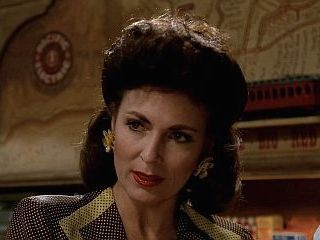 "So tell me, Eddie, is that a rabbit in your pocket or are you just happy to see me?"

A waitress/bartender and Eddie's girlfriend. 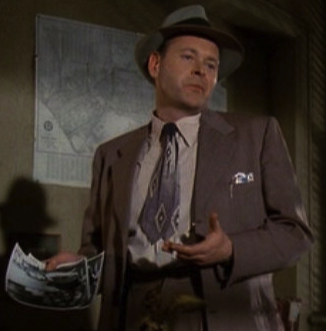 "Just like a toon to drop a safe on a guy's head." 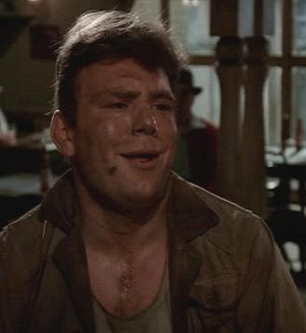 "Hey, so who's your client, Mr. Detective-to-the-Stars? Chilly Willy or Screwy Squirrel?"

A regular patron of the Terminal Bar.

A human Private Detective and former cop whom Eddie refers Roger to. Takes Eddie's place in the Roger Rabbit comics.

A trio of Toon Weasels who are the Toon Patrol's brothers and Judge Doom's new henchmen. They only appear in the graphic novel sequel.

R.K. Maroon's identical twin brother, who inherits Maroon Cartoons after his brother's death and continues on as its CEO in The Resurrection of Doom and the following comic series.