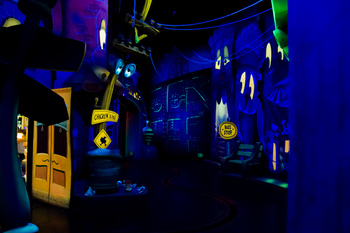 The sinister side of Toontown.
Advertisement:

Roger Rabbit's Car Toon Spin is a dark ride attraction at the Disney theme parks based on Who Framed Roger Rabbit and the subsequent Roger Rabbit shorts. Originally debuting in 1994 as part of a second phase of development in Disneyland's Mickey's Toontown, the land and the ride itself were cloned at Tokyo Disneyland in 1996.

A Spiritual Successor to classic Fantasyland attractions like Mr. Toad's Wild Ride, Alice in Wonderland and the Mad Tea Party, Car Toon Spin takes guests on a madcap joyride into the sinister underworld of Toontown, careening through dark alleyways, the Toontown powerhouse and into the Acme Warehouse in search of Jessica Rabbit who has been kidnapped by a gang of Weasels.

In 2021, as part of a series of inclusionary updates to attractions around the parks, Jessica's damsel in distress part was removed in favor of a new "Jessica as detective" storyline, which saw her red dress switched out for a yellow trenchcoat.