Ordinary mortals who were unlucky enough to be born (or reborn) at the exact moment a powerful alien, somewhere else in the galaxy, died and became a demon. Initially their demons have limited powers and follow them around as spirits, but each host and demon has the potential to make a contract, fusing their souls and becoming very, very powerful. So far we've met four- Ava, Maggie, Gil, and Odin. 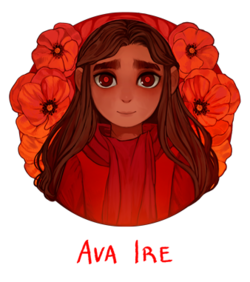 Ava hasn't had a very pleasant life considering that she has been possessed by a rather angry demon since birth. Said demon has constantly attempted to either kill, or pressure her into making a "Pact" without any explanation of what it entails. The story begins some time after Ava was separated from her parents and sent to a re-education planet terraformed and run by TITAN Inc. 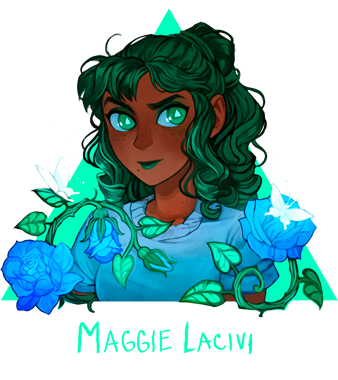 "So... Tuls, darling, I need you to work your magic again. Pretty please?"

Another child brought to the re-education planet and one of few children Ava has ever been friends with, although the friendship didn't last long due to Wrathia's tampering. She is odd in her own right and seems to have a few issues about image. She has problems with Odin who she views as a stalker, and is arguably justified in thinking so. She also has an enormous crush on Gil.

or her hair to hide her pact door key.
Odin Arrow 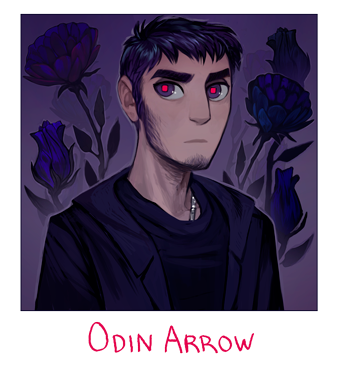 A student who attended Ava and Maggie's class and has an odd interest in Maggie. Little is known about Odin aside from the fact that he hails from a different planet than Maggie and Ava. His age was rather nebulous at best, as he is stated to be the same age as the others yet looks far older, but was later revealed to be 18 by Crow and Raven. At the start of the story, Odin tries to convince Maggie to leave the planet with him, and insists that she is in danger from something.

Although this only from Gil's perspective thanks to Nevy's meddling and influence on Gil.
Gil Marverde 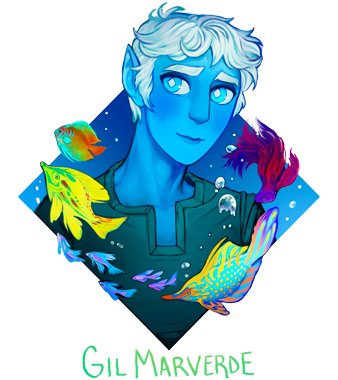 "What kind of doctor would I be if I just left them to die?"

A blue-skinned boy from another planet and an aspiring doctor. Close friends with Nevy Nervine and has promised to ask TITAN a very important question on her behalf. He seems to be kind-hearted and perfectly willing to help others at his own expense. Reveres TITAN as a sort of leader/god. 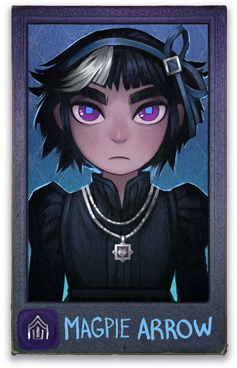 The youngest of the Arrow triplets. 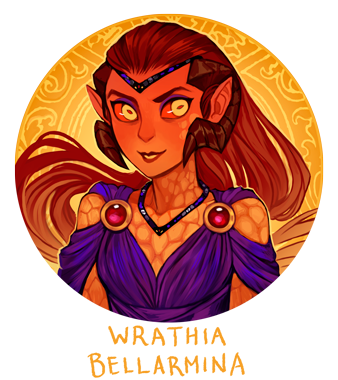 "If you hadn't ignored me you would know how important I am to this current universe! I have UNFINISHED FUCKING BUSINESS that will never be taken care of!"

The eponymous Demon herself. Not much can be said about her back-story without spoiling, but suffice to say that she is/was very powerful and considers herself a higher being than others, which may not be so far from the truth. She has been tied to Ava from the day Ava was born and had taken it upon herself to makes her life as miserable as possible with semi-good reasons. Hates TITAN with a passion. 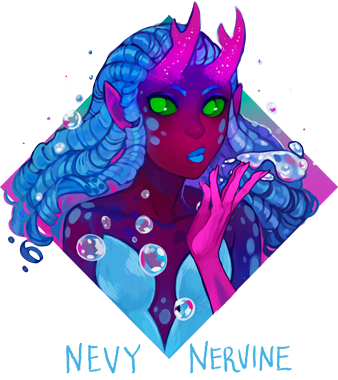 "You can't be this nice to strangers, Gil. You're gonna get hurt."

Next to nothing is known about Nevy's past, which is due to her full-blown amnesia. She is bubbly and good friends with Gil, who she wants to keep out of harms way. At times, she seems very possessive of Gil and is prone to being jealous of people he gives attention to. Nevy desires to ask TITAN about her past after she heard that he is omniscient, and desperately wants to learn the truth about herself and who she is. 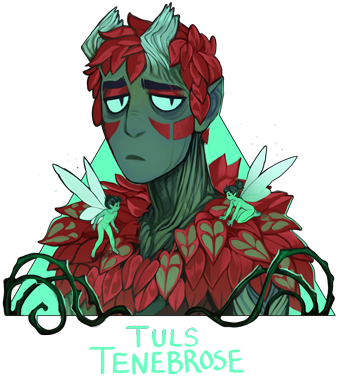 The demon possessing Maggie. Green, with a thing for plants. 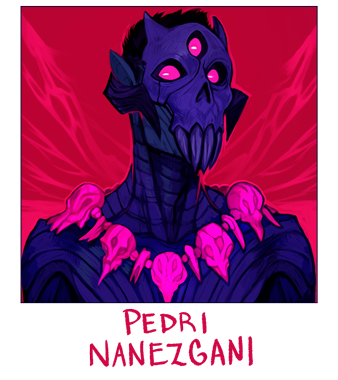 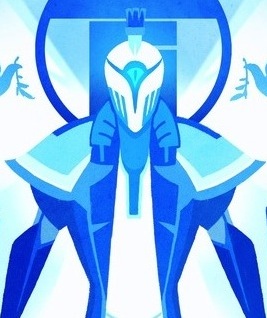 "HE CREATED THE BEGINNING OF EVERYTHING, AND CRAFTED TIME AND SPACE WITH A KNIFE. LIFE BEGAN IN THE PALMS OF HIS HANDS, AND WHEN YOU LOOK DOWN HIS THROAT YOU CAN SEE THE ENTIRE UNIVERSE."
— TITAN’s holy scripts

(take them with a grain of salt)

Not much is known about the entity called "TITAN". He was able to conquer Wrathia's empire of multiple galaxies in the span of a day, and his name is always written in caps. Most likely in charge of TITAN Inc., the company which established Ava's re-education planet. TITAN is rumored to be "all-knowing", although this is likely propaganda spread by TITAN Inc. His forces are said to consist of a "massive army of "followers"", but it is unknown if all of them are willing participants in TITAN's galactic conquest. 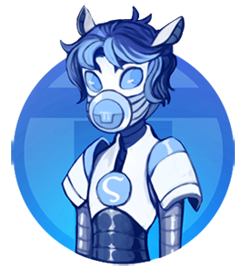 "Without TITAN, life has no meaning. TITAN is the best thing you'll ever have."

A follower chosen by Strategos Six to serve as their new assistant, renamed to Taxiarch Five to befit her promotion to third-in-command of the TITAN army.

A follower of TITAN and a colleague of Strategos Six. She helps produce machinery for the TITAN cause. 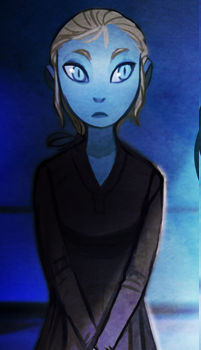 "Not everyone is cut out for TITAN's Paradise ...especially those who are lazy."

Loyal follower of TITAN and classroom mate to Gil.

is a character made by thecarefree, or Nami, who is a friend of Michelle.

A minor Follower introduced in Intermission One. She is an original character made by navadraw (Nava).

A minor Follower introduced in Intermission One. They are an original character made by goatanarchy69 (Arsha).

A minor Follower introduced in Intermission One. He is an original character made by FoCH. He has the minor misfortune of being at Titan HQ during Ava's rampage. 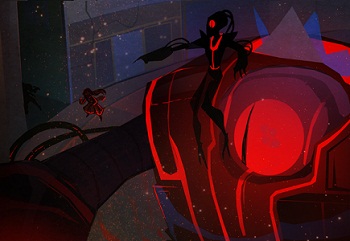 Strange and violent creatures who attacked and destroyed Ava's home planet. Their race seems to have control of powerful technology, as demonstrated by the robots used to attack Ava's homeworld, and their capability to destroy an entire planet in a relatively short time span. Odin and his brother seem to have some knowledge and possible past experience with these creatures, although to what extent is unknown. Odin was fortuitously warned by his brother about the impending Silent Scavenger invasion, and is able to escape the planet, along with Maggie and Ava. The Silent Scavenger's motives, allegiance, and origin are a mystery to the public. 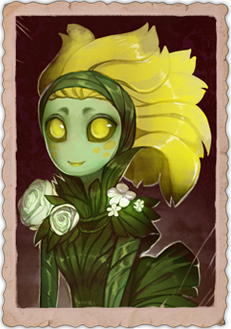 A girl from Tuls' past. 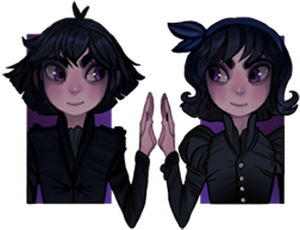 A maid in the Arrow household.

The eldest brother of the Arrow siblings.