Video Game / Odell Down Under 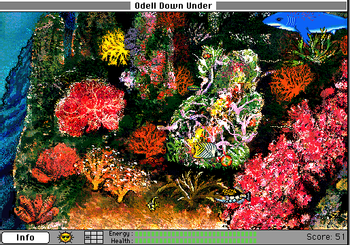 Odell Down Under is an Edutainment Game by MECC, the same people who brought the world The Oregon Trail. It's a sequel to Odell Lake and shares the same premise: You're a fish. Your goal? Stay alive.

Gameplay is simple — keep your energy up by eating things, keep your health up (for smaller fish) by encountering cleaner fish, and keep alive by not being eaten. It's far more addictive than it sounds.

There are four modes:

Many people know the game from the limited demo that came with at least one Oregon Trail II disc, in which only Practice mode is available, limited to ten fish (to be fair, it's a decent variety of fish).