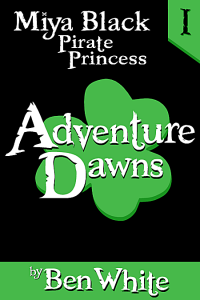 Adventure Dawns (2010) is the first in the Miya Black, Pirate Princess series by BJK White. It deals with the misadventures of one Miya Black, self-proclaimed pirate and princess of somewhat dubious royal lineage.

Miya lives on Clover Island with her parents, ex-princess Lilith Black nee Brightburn and ex-pirate Tomas Black. The story goes that around fifteen years ago Tomas met Lilith and stole her away from her parents, and together they eventually decided to create their own kingdom on a little island in the Rainbow Archipelago. Miya was born shortly afterwards, and grew up as the princess of the island, splitting her time between learning about princess-y things like royal laws and pirate-y things like sailing, fighting, swimming etc.

Everything in her life seems to be going pretty well, until her fourteenth birthday. That's when the news that a pirate by the name of Badger Pete has attacked the northern islands and is heading their way. Miya sets out to find a way to stop him, deciding to enlist the help of her paternal grandparents—who happen to be legendary pirates.