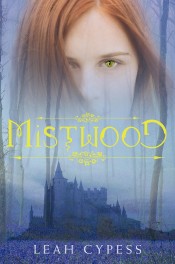 Mistwood is a book by Leah Cypess.

When the Shifter, an immortal being who has protected the royalty of Samorna for as long as anyone can remember, is called once again from her Mistwood to serve the soon-to-be-King Prince Rokan, it doesn't seem like anything can go wrong. After all, the Shifter can change her form at will, becoming a wolf or a snow cat as needed. She can move at inhuman speeds, sense danger, and deflect any magical attack. She has never failed, and she never will. Right?

Isabel, the Shifter, and feel that there's something wrong. She's not what she's supposed to be. She can't do all that she should. The Shifter loses her memory every time she goes back to the Mistwood, but Isabel keeps seeing flashes of herself, running, in pain, afraid, crying.

And the Shifter shouldn't be able to cry.