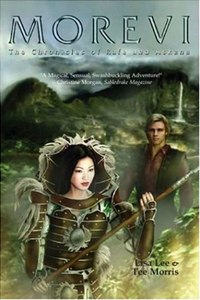 Cover of the print edition.
Advertisement:

Tee Morris and Lisa Lee's novel Morevi: The Chronicles of Rafe and Askana was published in print by Dragon Moon Press in 2002. The book started out as a chance role-playing session between the two authors, spawning an intense, extensive exchange of material, and they eventually decided to turn it into a book. In 2005, Morris released an abridged version via Podcast, with narration and character voices performed solely by him; Morevi is widely regarded as the first Podiobook. In 2008, he returned to Morevi to podcast the complete novel, with the addition of guest voices and new music and sound effects, available here

Morevi, a landlocked kingdom shrouded by jungles and mystery, falls under the rule of Askana Moldarin, known in her realm as ?The Black Widow? following her swift and bloody ascent to the throne. In the dawn of this New Age, hidden traitors in her own regime threaten to destroy everything. Askana, independent of council, seeks help to reveal the conspiracy against her. Enter Rafe Rafton, captain of the Defiant, an English privateer during the reign of King Henry VIII. In an unlikely partnership, the two attempt to further their own ends as far as the other will let them, and blow some things up in the process.

The sequel is Legacy of Morevi, with Tee Morris as sole author.