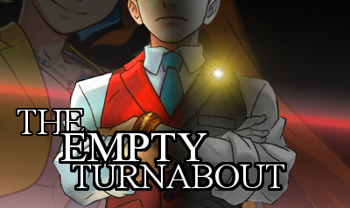 Taking place in an Alternate Universe of Phoenix Wright: Ace Attorney – Dual Destinies, The Empty Turnabout features the murder of Ian Arts, a mysterious wealthy man responsible for a major scandal in the past. Apollo Justice steps up and decides to defend Nathaniel Marston of this crime, believing that he is innocent despite having confessed to the deed. Former Lawyer Phoenix Wright gives Apollo his attorney's badge back and comes along for the ride as a mere spectator. Will Apollo defeat the Chief Prosecutor himself in court or make yet another blunder after what happened in That One Case six months ago? A certain figure in yellow lurks in the shadows, watching every step Apollo takes...

Due to its length, the case is split in three chapters. You can play the first one here

, the second one here

and the third one here

The Empty Turnabout provides examples of: