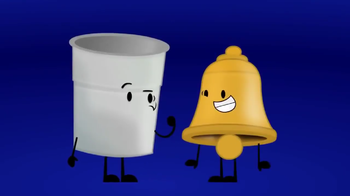 Becky (left) and Fred (right), the two we never saw again after 2016.
Advertisement:

Becky Bucket is a series created by AngryPaperPlateMan (who was called VLOGCentral back then). It is a Slice of Life (unlike most Object Shows that are competition-based) following the Title Character Becky Bucket and her roommate Fred on her quest to desperately become famous.

However, there was only a Pilot released called "Bucket Records", which can be found here

, before APPM cancelled it due to hating it.