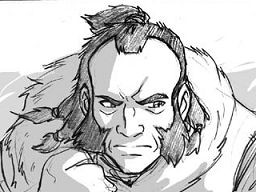 An Avatar: The Last Airbender fancomic by Rufftoon, aka Johane Matte who was one of the storyboarders on the show.

The major conceit of the comic is that Zhao, the villain of season one, wasn't killed by the Ocean Spirit in the season finale. Instead, he was saved but had all his memories of his past life as a Fire Nation admiral erased. The comic deals with him first discovering that he is not really a Watertribesman, and then trying to figure out what to do in the new world of peace. Along the way, he clubs baby seal-turtles, fights pirates, and complains about the cold.

Water Tribe is notable for its high art quality (it is drawn by a professional) and close connection to canon. It's also interesting because Zhao is noticeably the same character he was in the original show— dressing him up in furs and having him pray to water spirits doesn't change his personality, and he's still as arrogant, ambitious, and angry as he was in the series.

The complete comic is hosted on her livejournal here.

, along with concept art and sketches. The entire comic, fanart, and other Water Tribe-related bits can also be found at No Self Control,

the biggest Zhao fanclub on dA.

This fancomic provides examples of: